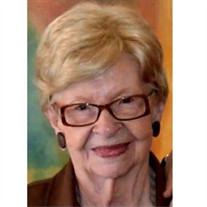 Margot Graney Mudd, age 98, of Plantation, Florida, and formerly of Bowling Green, passed away Friday, April 3, 2020 at the home of her daughter. Margot was born November 14, 1921, in Cleveland, Ohio, to John G. and Pauline (Perry) Graney, both natives of St. Thomas, Ontario, Canada. Margot’s father, Jack Graney, was a major league baseball player and Voice of the Cleveland Indians for 22 years. Margot threw out the first ball in a major league game when her father was posthumously inducted into the Canadian Baseball Hall of Fame in 1984. Margot graduated from Miami University of Ohio in 1943 with a degree in Romance Languages. During WWII, she was recruited by the Signal Corps in Washington, D.C., as a cryptographer/code girl working to break the Japanese shipping code. She was sworn to secrecy for life and was only recently allowed to discuss her experiences. In 2018, she was given a VIP tour of the National Cryptologic Museum near Washington, where she was thanked for her service to her country. In 1944, Margot married J.O. Mudd, of Silex. When Captain Mudd returned from overseas, they opened the Mudd Funeral Home in August 1946, a firm they operated for more than 40 years. J.O. preceded her in death in 1999. Margot was a licensed Funeral Director. Due to a shortage of language teachers, Margot was tapped by Principal George Nienheuser to return to college where she obtained a teaching certificate from the University of Missouri. She subsequently taught French, Spanish, and English at BGHS for ten years. Margot was an ordained Elder in the Presbyterian Church, a member of the Bowling Green Library Board, a member of the Champ Clark Honey Shuck Board, a member of Delta Zeta Sorority, and a member since 1957 of Chapter DA of P.E.O. Margot Mudd is survived by her daughter, Perry Smith (Ernie Smith) of Plantation, Florida; grandchildren Matthew Smith (Jessica Richman Smith), children Zachary, Alexander, twins Eleanor and Vivienne Margot Smith of Westport, Connecticut; Jessica Smith (Erik Olson), children Jack and Genevieve Olson of Washington D.C.; and Daniel Smith (Nikka Graff Lanzarone) of Brooklyn, New York. Reverend James Ayres of Bowling Green First Presbyterian Church will conduct graveside services at Bowling Green Memorial Gardens Cemetery, and a memorial service will be held at Bibb-Veach Funeral Home in Bowling Green, formerly the Mudd Funeral Home, at a later date when her extended family will be able to attend.

Margot Graney Mudd, age 98, of Plantation, Florida, and formerly of Bowling Green, passed away Friday, April 3, 2020 at the home of her daughter. Margot was born November 14, 1921, in Cleveland, Ohio, to John G. and Pauline (Perry)... View Obituary & Service Information

The family of Margot Graney Mudd created this Life Tributes page to make it easy to share your memories.