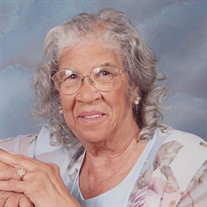 Marie Lyola Campbell, age 91 of Frankford passed away 7 April 2016 at the Hannibal Regional Hospital. Funeral services will be held 1:00 p.m., Saturday, 16 April 2016 at the Second Christian Church in New London with Rev. Faye Vaughn officiating. Burial will be in the Green Ridge Memorial Park in Frankford. Visitation will be 11:00 – 1:00 p.m. Saturday, 16 April 2016 at the Second Christian Church. Marie was born on 1 November 1924, in New London. She was the 5th child born to the union of Art Oliver King and Beatrice M. Drake. Her parents, Art and Beatrice preceded her in death, as did six of her siblings. Her siblings were: Richard King, Chester King, Benton King, Ray King, Oneta King Welch and Velma King Turner. Marie departed this life to join the Almighty on 7 April 2016. Marie joined the Second Christian Church of New London, at an early age, walking over 4 miles each Sunday to attend the same. While working in other church’s in Frankford, she remained an active member of her first church all of her earthly life. She married Raymond Herbert Campbell on 14 May 1944, in New London. They were married for 43 years. To this union one Son was born, William R. (Billy Ray) Campbell, Raymond, preceded her in death on 6 June 1987. Marie was a housewife and a pillow of strength and leadership in the Frankford and surrounding communities. She was instrumental in keeping the African American churches in Frankford, maintained even though the members had passed on or moved away. She made sure the annual choir day which was started in 1946 continued. She worked, many days alone, cutting grass, at both Black Church’s in Frankford and the Black cemetery. She also picked up and delivered the mail for many elderly people in Frankford until they passed away. She leaves to rejoice in her memory, a loving and devoted Son, Bill and his wife Estella, of Frankford. Her Sister, Catherine Green of Hannibal; her Grandsons Richard Campbell II (Debye) of Leavenworth, KS and Jason Campbell of Boston, MA; and Sister-in-Law Betty Wells of Springfield, IL; a host of great-grand and great-great grand nieces and nephews and cousins. God said to her-you are getting weary, So He did what He thought best, He came and stood beside her and whispered, “ come and rest” You shared no farewell, not even a goodbye, You were gone before we knew it, and only God knows why. Memorials may be made to the Green Ridge Memorial Park in Frankford.

The family of Marie Lyola Campbell created this Life Tributes page to make it easy to share your memories.

Send flowers to the Campbell family.