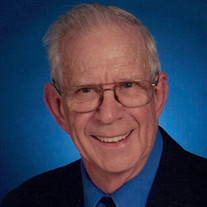 Marion George Meier, age 84, of Bowling Green, passed away Wednesday, August 16, 2017 at his home. Funeral services will be held at 10:00 am on Saturday, August 19, at the Bibb-Veach Funeral Home in Bowling Green, MO with Rev. Don Amelung officiating. Burial will be in the Wellsville City Cemetery with military honors being conducted by the Missouri Military Honor Guard, Bowling Green VFW Post #5553 and the Patriot Guard Riders. Visitation will be held from 4:00pm until 7:00pm on Friday at the funeral home. Marion was born on a farm near Bellflower, MO August 18, 1932, the son of Martin and Venetta Ensley Meier. On June 18, 1960 he married Shirley Sabina Smith at the Second Baptist Church in Bowling Green. She survives. Other survivors include children Stephen Dale Meier (Kristy) of Fairfax Station, VA, Candace Sabina Norton (Phillip) of Bowling Green; five grandchildren Madeline Sabina Norton, Molly Norton, Maddox Norton, Mallory Meier and Emily Meier; sisters Gail Leonard (Sonny) of Bellfower, Naomi Duvel of Olney; many nieces and nephews. He was preceded in death by his parents Martin Meier, Venetta Ensley Meier Stotler (Joe); grandparents Henry and Theresia Meier, William Sherwood Ensley and Elvira Ellen Cobb Ensley; brother Lowell Meier. Marion graduated from Bowling Green High School in 1951. He served in the United States Army having served in Germany from 1954 to 1956. He was a lifetime member of the Bowling Green VFW Post #5553 and served as the Commander for several years. Marion accepted Jesus as his Savior at the Wellsville Baptist Church and was baptized. Marion did many jobs during his lifetime. He was a mechanic and was the head of the Bus Barn for the Bowling Green R-I School District for many years. He owned and operated a grave excavating business, worked for Kirks Funeral Chapel and served as pastor at the Frankford Baptist Church. Marion enjoyed gardening, baking cookies, going to Branson with his wife and grandchildren, going to basketball games, visiting with family and friends and best of all serving as pastor at Frankford until his death. Serving as pallbearers will be Tim Leopold, Junior Riffle, Wayne Leonard, Kevin Leonard, Stephen Meier and Phillip Norton. Serving as honorary pallbearers will be Maddox Norton, Emily Meier, Mallory Meier, Molly Norton and Madeline Sabina Norton. Memorials may be made to Community Loving Care Hospice of Bowling Green or the Bowling Green Athletic Department of Bowling Green R-I Schools.

Marion George Meier, age 84, of Bowling Green, passed away Wednesday, August 16, 2017 at his home. Funeral services will be held at 10:00 am on Saturday, August 19, at the Bibb-Veach Funeral Home in Bowling Green, MO with Rev. Don Amelung officiating.... View Obituary & Service Information

The family of Marion George Meier created this Life Tributes page to make it easy to share your memories.

Send flowers to the Meier family.