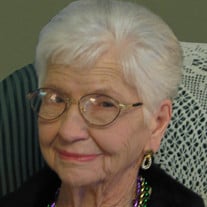 Marjorie E. ‘Murphy’ Edwards age 95, of Silex, Missouri, passed away June 23, 2015 at the Integrity Nursing Home in Godfrey, IL. Graveside services will be held 12:00 p.m., Saturday, June 27, 2015 at the St. Alphonsus Catholic Cemetery in Millwood with Fr. Charles Tichacek officiating. Marjorie was born February 14, 1920, in Silex, the only child of Jesse L. and Mary B. Dwyer Murphy. She married LeRoy E. Edwards Jr. October 12, 1946 in Silex. He preceded her in death on August 18, 1999. Survivors include one daughter Peggy Lee Anderson and husband Alan R. of Moore Haven, FL and Collinsville, IL and three step grandchildren Tiffany Anderson, Whitney Anderson, and Duke Anderson all of Wanatah, IN. She was preceded in death by her parents, and husband. Marjorie attended Silex grade school and high school, William Woods College in Fulton and Lindenwood College in St. Charles. She was a member of the St. Alphonsus Catholic Church in Millwood and also a member of the Daughters of the American Revolution. She spent 35 years working in various positions for the government. Marjorie loved spending time with her daughter and loved to laugh with her friends. She also enjoyed driving and visiting different places in the USA. Marjorie has resided in Silex, Bowling Green, St. Charles, Troy, Collinsville, IL, Glen Carbon, IL and currently lived in Integrity Nursing Home in Godfry, IL. Memorials may be made to St. Alphonsus Church for prayers for the souls of Jesse L. Murphy or Mary B. Murphy or Marjorie Edwards or the Donor’s Choice.

The family of Marjorie E Edwards created this Life Tributes page to make it easy to share your memories.

Send flowers to the Edwards family.