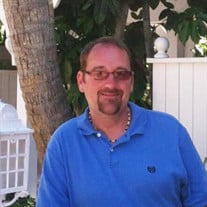 Mark Edward Morton, age 52, of Bowling Green, surrounded by his family, went to be with his Lord Monday, August 2, 2021. A Life Celebration Funeral Service will be held at 10:00am on Friday, August 6, 2021 at the Family Resource Center in Edgewood, MO with Rev. Mark Albee officiating. Tropical attire is requested for those attending. Burial will be in the Riverview Cemetery in Louisiana, MO. Visitation will be held from 3:30pm until 7:30pm on Thursday, August 5 at the Bibb-Veach Funeral Homes & Crematory in Bowling Green. Mark was born September 25, 1968 in Louisiana, MO, the son of Carl Fred and Bonnie Lee Hudson Morton. He grew up and was raised along the Mississippi River in Louisiana, graduating a Bulldog with the class of 1986. He attended Hannibal LaGrange College and graduated with a Bachelor of Science in Human Services. On July 20, 1991 Mark married his college sweetheart in Louisiana, MO. Together they moved to Bowling Green in the late 1990’s, where they raised their family. Left to carry on the legacy that Mark has left here on earth are his wife Carla Morton of Bowling Green; children Alexandra Noel Morton of St. Louis, Savannah Marie Morton of Bowling Green, and Blake Thomas Morton of Bowling Green; sister Sherry L. Cox of Quincy, IL; nephew Cody (Sydney) Cox of Louisiana, MO; niece Nikki (Bruce) Atteberry of Louisiana and a host of great and great-great nieces and nephews. Mark was preceded in death by his parents; sister, Becky Sousa; and nephew, Leo Schneider, Jr. Professionally, Mark had many diverse roles and positions. He began his service to others in his career in the Human Service field working at the CCACC Day Program and then later worked as the Program Manager for Pike Co. Senate Bill 40 Supported Employment. In 1995 he accepted a position with the Missouri Department of Health Hannibal Regional Office as a counselor and crisis team member. He then was promoted to Regional Trainer. In 2008, Mark accepted a position at Ruth Jensen Village as a Qualified Developmental Disability Professional and Trainer. Mark also served as professional consultant in the Human Service field. As a side hobby, he was a vacation planner. Mark was a faithful servant of the Lord and enjoyed sharing the Lord with others. He was a Southern Baptist and was a member of the Edgewood Baptist Church of Bowling Green. As well as serving as an ordained Deacon in the Baptist Church, through the years, Mark served as Sunday School teacher and children’s ministry leader. He was serving as youth leader at Edgewood Baptist Church prior to his illness. Mark also served as a member of the Gideons organization. Outside of the Church, Mark served his community through the civic organization as a former member of the Lions Club, as well as Special Olympics. Mark was an avid wrestling fan. Mark loved WWE wrestling and attended many wrestling events throughout the years including WrestleMania events. Mark’s passion for wrestling began early in life and led him to a successful career as a licensed professional wrestler, and member of the Midwest Independent Wrestling Hall of Fame. During his wrestling career, he wrestled under the name Marcus Mansfield. Mark was a loyal and dedicated son, husband, father, and friend. He loved making memories with those that he loved, especially vacations to the beach. Serving as pallbearers will be Brian Csendes, David Henderson, Charles Hopke, Patrick Jones, Steve Laws, Joey Minor, Matt Obert, and Cory Radford. Honorary pallbearers are Rob Brown, Ben Franklin, Glenn Jacobs, Mark Lunatto, David Moore, Philip Norton, Donnie Nulsen, Michael Reynolds, and Jeff Yowell. Memorials may be made to Edgewood Baptist Church Building Fund, American Cancer Society Hope Lodge in Rochester, MN, Pike County Home Health and Hospice, or to the Musella Brain Tumor Foundation.

Mark Edward Morton, age 52, of Bowling Green, surrounded by his family, went to be with his Lord Monday, August 2, 2021. A Life Celebration Funeral Service will be held at 10:00am on Friday, August 6, 2021 at the Family Resource Center in... View Obituary & Service Information

The family of Mark Edward Morton created this Life Tributes page to make it easy to share your memories.

Mark Edward Morton, age 52, of Bowling Green, surrounded by his...

Send flowers to the Morton family.