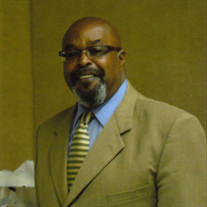 Reverend Marvin “Butch” Davis, age 76, of Eolia, MO, passed away Thursday, May 13, 2021 at the Harry S. Truman Memorial Veterans Hospital in Columbia, MO. Home Going services will be held at 11:00 am Saturday, May 22, 2021 at the Nazarene Church in Bowling Green, MO with Rev. Payton Parker and Rev. Elliott Parker officiating. Burial will be at Memorial Gardens Cemetery. Visitation will be held from 4:00 pm until 7:00 pm on Friday at the Bibb-Veach Funeral Home & Crematory in Bowling Green. Butch was born on July 4, 1944 in Quincy, Illinois to Eugene Davis and Eileen Douglass. He was the firstborn child to this union and as a young child was affectionately given the nickname ‘Butch’. While still an infant the family moved to Bowling Green. He was the apple of their eyes and they would always proudly tell the story of how he won the first baby contest at the Pike County Fair. His beloved baby sister would not arrive for sixteen years, so to say that he had a ‘cherished’ childhood would be an understatement. Butch attended Bowling Green R-1 schools and graduated with the class of 1961. Although he did not participate in school athletics, he was a fan of all sports. He was particularly an enthusiastic fan in support of his children and anyone that was a Bowling Green Bobcat. After high school Butch chose to serve his country by joining the United States Navy. He served in the early part of the Vietnam War era and was trained as a Boatswains Mate. Upon being honorably discharged, he returned home and found that a childhood friend had grown to become the woman he wanted to marry. On April 17, 1966 Butch married Ernestine C. Shepherd. This union was blessed with three children Ms. Tracy Anderson of Madison, Alabama; Mrs. Shelly (Elliott) Parker of Oklahoma City, Oklahoma; and Mr. Travis (Deborah) Davis of McKinney, Texas; ten grandchildren: Austin Anderson, Aaron Anderson, Elliott (Iesha) Parker III, Payton (Tahvia) Parker, Sheridan Parker, Sterling Davis, S’mone Davis, Olivia McKee, Crandon Cook, and Natasha Saunders; and one great grand-daughter Nyla Coats. On July 29, 2003, he was preceded in death by his beloved Ernestine, but later found love again and on July 7, 2005 married Lynn P. Douglas. To this union his family grew again by adding a daughter April (Lee) Hunter of Eolia; son Zach (April Black) Douglas of Winfield; grandchildren Aushontae Douglas, Ashlyn Hunter, and Kingston Douglas. Also surviving include sisters-in-law who are very close Linda Shepherd and Robyn (Calvin) Shepherd-Miles; brother-in-law Daniel Robinson; and a host of nieces, nephews, cousins, and friends. He was preceded in death by his parents; wife; and two sisters Denise, who passed in infancy and Debra Davis-Robinson. Being an active father was his greatest pleasure and he made sure that his children always knew that they were his pride and joy. Though Butch had three children, he lovingly “fathered” many by being a special step-father, grandfather, uncle, older brother, and mentor to an enumerable amount of people. During Butch’s working years he began at Louisiana Plastic and later spent 36 years at the Harbison-Walker Brick Plant in Vandalia, MO where he retired in 2002. Butch accepted Christ as a young man and later accepted his call to ministry at his beloved family church White Rose Missionary Baptist. He became ordained and his first assignment was to pastor New Jerusalem Tabernacle of Praise where he and his wife proudly shared the love of Christ. He later answered the call to return to his childhood church, White Rose, as it’s pastor. His ministry and passion for sharing the love of Christ could be seen in all areas of his life but particularly in his love of uplifting people and in singing the gospel. He was a talented singer and was well known for his renditions of Jesus Dropped the Charges and His Eye is On the Sparrow. Serving as pallbearers will be Aaron Anderson, Austin Anderson, Sterling Davis, Elliott Parker III, Maurice Conley, and Justin Robinson. Serving as honorary pallbearers will be Ralph Reynolds, Leonard Bragg, Chris Redd, Cecil Elder, Jamie Wheeler, and William Wheeler. Memorials may be made to the White Rose Baptist Church.

The family of Marvin Eugene Davis created this Life Tributes page to make it easy to share your memories.

Send flowers to the Davis family.