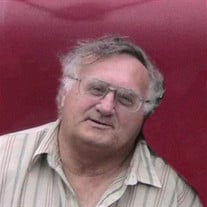 On Monday September 16, 2019 Marvin Earl Perkins began a new journey; Heaven bound. Funeral services will be held at Bibb-Veach Funeral Home Friday, September 20, 2019 at 11:00 a.m. Visitation will be from 4:00 to 8:00 p.m. on Thursday, September 19 at the funeral home. He was born October 20, 1947 to Edna F. Southard Perkins and Virgil H. Perkins. He married LoRena Ann Hinds on May 22, 1971. Together they have three children; Wesley and Shonda Perkins of Bowling Green, Colleen and Shad Simonton of Bowling Green, and Skyler and Laura Perkins of Bowling Green. He is also survived by seven grandchildren; Kayla and Doug Perkins, Maverick, Tanner and Rose Simonton, and Alex and Grant Perkins. Also, a sister Shirley Rector, and three brothers; Donald Perkins and Audry, Bernard and Gloria, and Gary Perkins, brothers and sisters-in-law, nieces and nephews, and great-nieces and nephews whom he loved. He was preceded in death by his parents and parents-in-law and by Valerie Perkins, a much-loved daughter-in-law. Mr. Perkins loved his Lord. He served his country in Vietnam with the United States Army. He dearly loved his children and grandchildren. His favorite times in life were the ones spent with them as family. He enjoyed collecting old gas pumps and cars. Mr. Perkins also enjoyed carpentry work and people stopping by and sharing his love of times past. Pallbearers will be Frank Hinds, Bill Hinds, Donnie Perkins, Bernard Perkins, Buddy Perkins, and Jason Farrah. Honorary pallbearers will be Gary Perkins and John Turnbough. Memorials may be made to the family.

The family of Marvin Earl Perkins created this Life Tributes page to make it easy to share your memories.

Send flowers to the Perkins family.