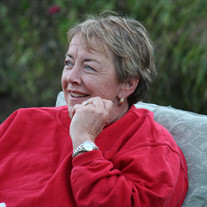 Mary Ann Meives, age 60, of Silex passed away January 23, 2016 at her home. Funeral services will be held 10:00 a.m., Friday January 29, 2016 at the Elsberry RII School. Burial will be in the St. Alphonsus Cemetery. Visitation will be held 4:00 – 8:00 p.m., Thursday, January 28, 2016 and 8:00 – 9:00a.m., Friday January 29th at the Elsberry RII School. Mary was born December 24, 1955 in St. Louis the daughter of Joseph M and Angela C Vossel Hayes. On May 20th, 1995 she married Ed Meives. He preceded her in death. Survivors include brother John (Jacque) Hayes of Las Vegas, NV; sister Joan Beckwith of Hazelwood ; nieces and nephews Charles (Buffy) Beckwith, Betsey Hayes Catalano, William Hayes, Dan Conoyer (Stephanie), Julia Valencia (Phil), Mary Fleri (John), and numerous others; great nieces and nephews Joseph Beckwith, Kylee Beckwith, Angela Beckwith, Nicole Conoyer, Abby Conoyer, Cecilia Fleri, Ana, Ethan and Emily Valencia and numerous others; and Helen Chadeayne and family. She was preceded in death by her husband, parents, and brother William Hayes. Mary grew up in Creve Coeur Missouri and attended Ladue High School. She assisted with the care of her mother until her death. Once married, Mary and Ed lived on their farm in Silex, Missouri. She attended church at St. Alphonsus Catholic Church in Millwood. Mary taught in several school systems, most recently at Elsberry School District. She was passionate with regard to her students and preparing them for the future. It brought her great enjoyment to see children develop new skills and grasp new concepts. Mary had the knack of conversation and friendship. She enjoyed many diverse circles and brought so many people together from different walks of life. She traveled often (though probably not as much as she would have liked) and seemed to have a friend to meet and catch up with wherever she went. She enjoyed gardening, the outdoors, learning, animals, and cooking. A friend to so many, she will be missed by all. Memorials may be made to the Mary Ann Meives College Scholarship Fund. Please make checks payable to LCR2 (Lincoln County R2 School District).

Mary Ann Meives, age 60, of Silex passed away January 23, 2016 at her home. Funeral services will be held 10:00 a.m., Friday January 29, 2016 at the Elsberry RII School. Burial will be in the St. Alphonsus Cemetery. Visitation will be held... View Obituary & Service Information

The family of Mary Ann Meives created this Life Tributes page to make it easy to share your memories.

Send flowers to the Meives family.