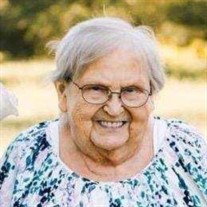 Mary Frances Schroeder Bontz, 85, of Mexico, passed away Thursday, April 28, 2022 at Boone Hospital in Columbia, Missouri. Memorial services for Mary Frances will be held Wednesday, May 4, 2022 at 10:00 a.m. at St. Clement Catholic Church with Fr. Henry Ussher officiating. Burial will be in St. Clement Cemetery. Visitation will be from 9:00 a.m. to 10:00 a.m. at St. Clement Catholic Church. Mary was born May 13, 1936 in St. Clement, Missouri to George and Margaret Tepen Schroeder. She was united in marriage to Victor Stanley Mannahan in the fall of 1954 at St. Clement Catholic Church. He preceded her in death on January 1, 1969. Mary later married Eugene Leslie Bontz on June 14, 1980. He preceded her in death on November 11, 1995. Mary was born in St. Clement and attended St. Clement grade school. She graduated from Bowling Green High School in 1954. Mary lived in Clarksville and Louisiana until moving to Vandalia in 1980. In 1987, Mary moved back to Louisiana, where she resided until she moved to the Essex Assisted Living in Mexico in 2012. Mary was a member of St. Clement Catholic Church, St. Joseph Catholic Church, and currently a member of St. Brendan’s Catholic Church. She was a member of Ladies Sodality and the American Legion. Mary was primarily a homemaker, although she did also babysit. She enjoyed gardening and traveling with the ladies on the Oats bus. Mary liked to bake, especially zucchini bread and Amish bread, as well as making puppy chow. She loved spending time with her grandchildren and great-grandchildren, and always enjoyed taking pictures of her family. Mary was a collector of thimbles and state spoons. She was a die-hard St. Louis Cardinals fan, and also enjoyed NASCAR. Mary liked having coffee and cream while visiting with the ladies in the nursing home. Mary is survived by children: Vickie Love (Eddy) of Louisiana, Bob Mannahan (Janice) of Louisiana, Susie Bannister (Richard) of Mexico, Leon Mannahan of Louisiana, and Teresa Love (Tim) of Mexico; grandchildren: Melissa (Keith) Kieffer, Emily (Aeran) Hubbard, Gina Holland (Will Tolbert), Derrick Mannahan, Mandy (Aaron) Cope, Jeremy Mannahan, Josh (Rachel) Hendrix, Jake (Danielle) Hendrix, and Paul (Kristina) Love; 20 great-grandchildren; 2 great-great-grandchildren; sister-in-law, Donna Hoover of Vandalia; and many nieces and nephews. She was preceded in death by her parents, both husbands, siblings Robert Schroeder, Celeste Korte, and Leo Schroeder; and grandson, Justin Mannahan. Memorials may be made to St. Clement Cemetery.

The family of Mary Frances Bontz created this Life Tributes page to make it easy to share your memories.

Send flowers to the Bontz family.