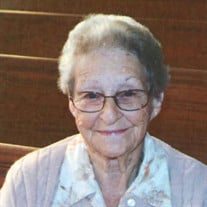 Mary Elizabeth Brewster, 101, of Bowling Green, passed away Saturday, August 22, 2020. Funeral Services will be held Thursday, August 27, 2020, at 1:00 p.m. at Bibb-Veach Funeral Home in Bowling Green. Visitation will be from 11:00 a.m. to 1:00 p.m., also at the funeral home. Burial will be at Memorial gardens Cemetery in Bowling Green. Mary was born on December 28, 1918 in Middletown, Missouri to Floyd D. and Alta Marie Butler. She was united in marriage to Charles Alvin Brewster on August 28, 1943 in Pocatello, Idaho. He preceded her in death. Surviving is daughter, Linda Gruszka-Brewster of Bowling Green; grandchildren Rodney Brewster of Mexico, Missouri, Terry Brewster of Mexico, Missouri, Danny Brewster of Mexico, Missouri, Christopher Gruszka of Raymond, New Hampshire, and Grant Gruszka of Bowling Green; sisters Dorothy Hinkle of Stockton, Missouri, Clemma Sue Messmer of Frisco, Texas, and Helen Todd of Louisiana, Missouri; and many nieces, nephews, and friends. Preceding Mary in death were her parents; husband, Charles Brewster; son, Alvin Brewster; grandson, John Brewster; great-grandson, Brogan Brewster; brothers Keith Butler, Clarence Butler, Richard Butler, and John Butler; and sister, Martha Delozier. Mary was born and raised in Middletown. She lived in Arizona while Charles was overseas in the service. Later, they lived in Mississippi. They moved back to Pike County in 1950, where Mary resided until the time of her death. She was a faithful member of Second Baptist Church for many years. Mary was very active in the VFW; where she was an auxiliary member of Post 5553 and District 17, and also served as President on both committees for two years. Mary loved attending church functions, gardening, and doing yardwork and housework. She was a great cook, and was well-known for her peach cobbler and her apple banana salad. Pallbearers will be Danny Brewster, Christopher Gruszka, Donnie Brewster, Scott Brewster, Kenneth Wayne Baker, and Kyle Brewster. Honorary pallbearers will be Grant Gruszka, Albert Carr Worthington, Raymond Worthington, Austin Brewster, Mason Brewster, and Kory Brewster. Memorials may be made to the Second Baptist Church.

The family of Mary Elizabeth Brewster created this Life Tributes page to make it easy to share your memories.

Send flowers to the Brewster family.