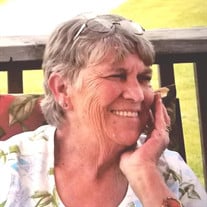 Mary Frances Gibson, 75, of Curryville, passed away Sunday, August 9, 2020 at her home, surrounded by her loving family. Services for Mary are being planned and will be held at a later date. Mary was born on August 13, 1944 in St. Louis, Missouri to Wincey and Elsie Webb Brown. She was married to Guy Gibson on April 10, 1976 at the First Baptist Church in Wentzville. He survives. Also surviving are daughters: Dawn Burgett (Steve) of Bowling Green, Sandy Grote (Paul) of Curryville, Melissa Tetrault (Jon) of Bowling Green, and Mary Elizabeth Gibson of Curryville; grandchildren: Josh Barton, Guy Storz, Danny Barton, Steve Burgett, David Barton, Teala Tetrault, Tyler Burgett, Thayer Tetrault, Jacob Grote, Chloe Gibson, and Logan Gibson; 10 great-grandchildren, with one on the way; brother, Harold Brown (Betty) of St. Louis; sister, June Mainieri of High Ridge, Missouri; and sisters-in-law Judy Brown of St. Louis and Betty Barello of Florida. Mary was preceded in death by her parents; brothers, John and Ray Brown; and in-laws, Faydalis and Doris Gibson. Mary grew up in University City, Missouri. She attended University City High School and received her G.E.D. in 1962. The family moved to Wentzville in 1967. After marrying, she and Guy moved to Curryville in 1988. Mary drove a bus for the Wentzville School District for 17 years. She worked at Bowling Green Vet Clinic for 24 years, until last year when her health began to fail. She was a 4-H leader and a fair judge in St. Charles. She was also a Master Gardener, Level 4, and a Girl Scout Leader. Mary loved animals and gardening, as well as spending time in nature. She loved her grandchildren, and her house was the house where all the kids and their friends wanted to be. ADDITION: The family would like to invite all friends and family to a Celebration of Life honoring Mary. The Celebration will be held Saturday, August 22, 2020 from 2:00-6:00 p.m. at Double A's House (201 W. Church St.) in Bowling Green. Please feel free to bring a side dish. In leu of flowers the family has asked that donations be made to the Salvation Army or the Leukemia Foundation.

Mary Frances Gibson, 75, of Curryville, passed away Sunday, August 9, 2020 at her home, surrounded by her loving family. Services for Mary are being planned and will be held at a later date. Mary was born on August 13, 1944 in St. Louis, Missouri... View Obituary & Service Information

The family of Mary Frances Gibson created this Life Tributes page to make it easy to share your memories.

Send flowers to the Gibson family.