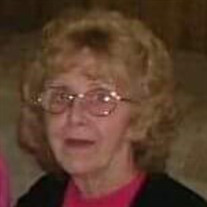 Mary Jane Pemble 77 of Silex passed away Friday December 16, 2016 at St. Joseph’s Hospital West in Lake St. Louis. Funeral services will be held Tuesday, December 20, 2016 at 2:00 pm at the Bibb-Veach Funeral Home in Silex with Father Charles Tichacek officiating. Interment will be in the Auburn Cemetery near Silex. Visitation will be held Tuesday from 12:00 pm until time of service at the funeral home. Mary Jane was born February 26, 1939 in Chicago, IL., the daughter of William and Cecilia Wortz Parsley. She was raised in the Chicago area and then met and eloped with Richard Pemble and were married on April 29, 1956 in Mississippi. They moved to Whiteside in 1972 where they continued to reside. Surviving family include her husband Richard, two daughters Sherry Pemble Johnson and husband David of Grayson, GA, Robin Rose and husband Earl of Bowling Green and son Richard Pemble and wife Amy of Clarksville; numerous grandchildren and great grandchildren. She was preceded in death by her parents and brothers. Mary Jane worked at Zenith assembling speakers, was a nurse’s aide at the Silex Nursing Home and worked as a housekeeper at Super 8 in Troy until retiring. She enjoyed hunting for arrowheads, fishing, bowling, crocheting, collecting antiques and enjoyed being with her children and grandchildren giving them her wisdom and strong advice whether they wanted it or not. Pallbearers will be Justin Rose, Jordan Pemble, Jeff Cashman, Will Reuther, Chris Walravin, Steven Vodohosky. Honorary Pall Bearers will be Emma Grace Pemble, Rachel Cashman, April Johnson-Pierce, Kevin Pemble and Allen Pemble, and Linda Johnson, Memorials may be made to the American Lung Association.

The family of Mary Jane Pemble created this Life Tributes page to make it easy to share your memories.

Send flowers to the Pemble family.