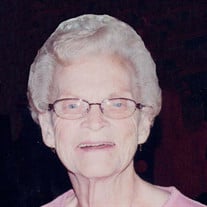 Mary Lee (Brown) Tinsley died at her home in Cyrene on Sunday, June 17, 2018. She had moved to her daughter Gail's home late in 2017 after surviving a stroke, and has been cared for by her and her granddaughter, Megan. She was born May 2, 1931 to Leslie Lee and Lula Mae (Thomas) Brown in Cyrene, and married Herbert (Spot) Spotsworth Tinsley on December 29, 1950 at Cyrene Baptist Church. She attended school at Cyrene and graduated from Bowling Green High School in 1949. She has been a member of Cyrene Baptist Church since 1947. She was preceded in death by her husband of 54 years, H.S. (Spot) Tinsley; a daughter, Kathy Tinsley; sons-in-law, Ron (Gail) Rutter and Terry (Elaine) Griffith; mother and father; sisters-in-law Doris (Bev) Riedel, Eleanor (Al) Moore, Madeline (Jimmy) Tinsley, and Dorothy (Huckstep Brown) Tinsley; mother- and father-in-law, Nancy O. and Herbert S. Tinsley; and brothers-in-laws, Jimmy Tinsley, Bev Riedel, and Al Moore. Their children are Elaine (Terry) Griffith of Owensville; Gail Rutter (Ron) of Cyrene, Kathy Tinsley, and Jean (Mark) Ledford of Cyrene. She is also survived by a brother, Phil (Mary Emma) Brown of Cyrene and their family, and nephew, Herb (Dolly) Tinsley and their family of Ft. Walton Beach, Florida. Mary Lee has 6 grandchildren; Scott Griffith and Erin Butler (Elaine), Benjamin Ledford and Katlyn Ervin (Jean), Lyndse Green and Megan Rutter (Gail) as well as 2 step-grandchildren, Mike Rutter and Christina Johnson (deceased). Great-Grandchildren total 10, with the addition of 2 more this year. Mary Lee lived her entire life in Pike County, Missouri except when, newly married. She and Spot lived in Fayette, North Carolina while he was serving in the US Army at Fort Bragg, North Carolina. While there, she worked at a dry cleaner and made some life-long friends. Fresh out of High School, she worked at the Bowling Green Times office. Upon returning from North Carolina, Mary Lee and Spot bought his family’s farm, and began their family. This farm is now a 6th generation family farm. While Cyrene had a post office, she worked there sorting mail. She also was a voting poll volunteer. She was always a Sunday School and Vacation Bible School teacher, very active in church activities. After her husband (the Church Treasurer since 1962) passed in 2005, she took up the position until the last few years, and their daughter, Jean has acted as the Assistant Treasurer. She was one of a quartet, singing for friends’ and families’ funerals in the area with Clareta Tinsley, Dorothy Bibb, and Betty O’Donel singing and playing piano or organ. In later years she would sing duets with her daughter Jean. In 1995, Mary Lee, Spot, and Kathy all moved off the farm and moved to Pike Co Road 43, were she lived until 2013. Then, she moved to an apartment in Bowling Green and lived there until 2017. Her life wish was to be a mom, a good mom. Her family thinks she accomplished this in aces. She always put in a large, beautiful garden; canned fruits and vegetables, raised chickens, sewed many, many clothes including wedding party and concert choir gowns for her children, and crocheting was a great pleasure to her, until arthritis took her out of the game. She was a great cook, one you compared others’ cooking to. She was generous, kind, and a loving Christian mom. She had many friends and was known by many people in the community. She will be missed by family and many others who loved her. Visitation will be held at Bibb-Veach Funeral Home in Bowling Green on Wednesday, June 20th from 5-8 pm. Visitation will be held at 9 am on June 21st at the Cyrene Baptist Church until time of service. Services will begin at 10 am at the church, with burial at the Antioch Cemetery with Rev. Bob Hoehn and Rev. Clay Boley officiants. Music will be provided by Janet Bibb. Pallbearers will be Clarence Frazier, Mark and Benjamin Ledford, Aaron Ervin, Scott Griffith, and Mike Rutter. In lieu of flowers, donations may be made to the Kathy Tinsley Memorial Scholarship Fund at HNB Bank, Pike County Hospice, Antioch Cemetery Association, or Cyrene Baptist Church.

Mary Lee (Brown) Tinsley died at her home in Cyrene on Sunday, June 17, 2018. She had moved to her daughter Gail's home late in 2017 after surviving a stroke, and has been cared for by her and her granddaughter, Megan. She was born May 2, 1931... View Obituary & Service Information

The family of Mary Lee Tinsley created this Life Tributes page to make it easy to share your memories.

Mary Lee (Brown) Tinsley died at her home in Cyrene on Sunday,...

Send flowers to the Tinsley family.