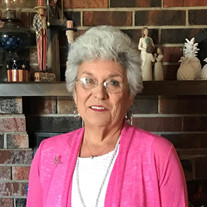 Mary Amelia (Montoya) Waddell went to be with the Lord on December 9, 2020. A Life Celebration Service will be held at the Curryville Presbyterian Church at 2:00 p.m. on Sunday, December 13, 2020, followed by a private graveside service. Shonda Galloway will officiate. Bibb-Veach Funeral Home of Bowling Green is handling the arrangements. Mary was born on August 5, 1946, the eldest child of Wilma Gardinia (Sparks) and Benjamin Lawrence Montoya in Monterrey Park, CA. She had one brother Benjamin Lawrence Jr. (Dani), he survives. She was later joined by a step mother, Shirley, and siblings Zenda Montoya and Carlton Montoya, all surviving. She had two very special aunts, Nettie Brackett and Loyaluia Brown. Loyaluia survives. Mary attended schools in California, Oklahoma, and Arkansas. She graduated high school in 1964 in Fort Smith, Arkansas. She received a Bachelors Degree in Speech Pathology and Elementary Education from Northeastern University in Tahlequah, Oklahoma. She later received her Masters Degree from Webster University. Mary came to Missouri in 1968 to teach in Vandalia. In 1972 she transferred to the Bowling Green School District where she taught for the remainder of her 33 years. Ten of those years she served the Champ Clark Board as Executive Director of the Learning Center for Early Childhood Education. During this time she established an inclusive education and daycare setting for children in Pike and surrounding counties. This program was used as a model in various areas of the state. She considered this to be one of her proudest educational moments. Mary met and married John Henry Waddell in August 1970, and they celebrated their 50th wedding anniversary earlier this year. To this union was born her proudest accomplishments, John David (Angie) and James Lawrence (Sarah). She felt her greatest legacy was her 11 grandchildren. John Brett, Ashlee Amelia (Zach Crader), Lillian Abigail, Madisyn Elizabeth, Mathew Ryan, Mara Grayce, Bennet Michael, Brennah Marie, Grant Maclin, Makenna Faith, and Elliot Micah. She is expecting a granddaughter February 2021. Faith played an important role in Mary’s life. She was baptized into the Church of Christ when she was eight years old. Later, after marrying John, she became a member of the Curryville Presbyterian Church where she served in whatever capacity she was needed. After retiring from teaching, she began lay ministry filling pulpits in Pike County and surrounding areas. Throughout her life, Mary participated in various organizations. A.A.U.W., B.P.W, Heir Study Club, and P.E.O. She was an active volunteer in 4-H and in the Curryville Community Organizations. She helped establish the Little Red School House. When asked what she wanted to be remembered for, she said, “I loved God with all of my heart, my soul, and my might and that I loved my family.” In lieu of flowers, the family requests memorials be made to the Curryville Presbyterian Church.

Mary Amelia (Montoya) Waddell went to be with the Lord on December 9, 2020. A Life Celebration Service will be held at the Curryville Presbyterian Church at 2:00 p.m. on Sunday, December 13, 2020, followed by a private graveside service. Shonda... View Obituary & Service Information

The family of Mary Amelia Waddell created this Life Tributes page to make it easy to share your memories.

Mary Amelia (Montoya) Waddell went to be with the Lord on December...

Send flowers to the Waddell family.