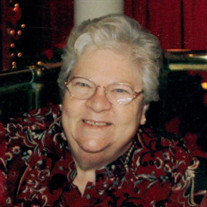 Melba Faye Smith, age 74 of Eolia, went to be with the Lord on Monday, November 23rd, 2015 surrounded by her family. Funeral services will be held at 11:00 a.m. on Friday, November 27th, at the Bibb-Veach Funeral Home in Bowling Green with Rev. Steve Brown and Rev. John Bateman officiating. Cremation will follow and the family will bury her cremains, as she requested at the Antioch Cemetery. Visitation will be held on Friday from 9:00 a.m. until time of services. Faye was born to William Henry Couch and Jessie Ulrich Couch on August 25, 1941 in Curryville, Mo. She attended and graduated from Bowling Green High School in 1959. Faye married Edward Smith on June 17th, 1960 in Cyrene, Mo. They have celebrated 55 years of marriage and were blessed with 3 beautiful daughters, Sharon O'Neill and Husband Stan of Spearville, Ks, Suzanne Smith and Shelley Hammitt both of Eolia, Mo, and one wonderful son Shannon Smith and wife Kimberly of Eolia. Many friends were introduced into Faye's life throughout her 74 years and she truly believed that they were brought into her life for a reason. Each and every one made an impact on her life. Thank you. Faye worked many years as a caterer and cake decorator, lovingly known as the "Cake Lady". She also worked at Stark Bro's as an import/export specialist, at Communitype as a graphic designer, owned and ran the Village Smith Resturant in Eolia, worked at the NECC State Prison in Bowling Green, and in Probation Parole as a receptionist in Troy, Mo. Faye redirected her life and was a born again Christian and spent the last decade of her life happily worshipping and serving the Lord. It is with confidence that she earnestly prayed for all of her family and friends to seek salvation so they may be with her again. Faye leaves behind her husband Edward, 3 daughters, Sharon, Suzanne, Shelley, son Shannon, 14 precious grandchildren, Tiffany, Brandon, Dustin, Ryan, Corey, Michael, Kimberly, Andrew, Kristine, Leslie, Eric, Tyler, Austin, Zane and 13 great grandchildren, Mesa Merrell, Garrett, Camille, Samantha, Noah, Landon, Norah, Jackson, Brayden, Cree, Bella, Dayva, Noah with twin great grand babies to be born this spring. Surviving siblings are Esther Maebelle Lybarger, and Joy Lynn Sutton both of Bowling Green, William (Bill) Henry Couch Jr. of Linn, Mo and Thomas Guy Couch of Versailles, Mo. and multiple nieces, nephews, cousins, and in-laws. Preceding her in death are her parents Henry and Jessie Couch, and two sisters, Rita Couch and Dorothy Irene Stokes. Honorary Pallbearers will be Leslie Anderson, Michael L. Smith, Andrew Smith, Dustin O’Neill, Tyler Smith, Corey Smith, Ryan O’Neill, Austin Smith, Eric Hammith, Zane Smith Memorials may be made to the Salt River Baptist Association Mission Fund or the Antioch Cemetery

Melba Faye Smith, age 74 of Eolia, went to be with the Lord on Monday, November 23rd, 2015 surrounded by her family. Funeral services will be held at 11:00 a.m. on Friday, November 27th, at the Bibb-Veach Funeral Home in Bowling Green with Rev.... View Obituary & Service Information

The family of Melba Faye Smith created this Life Tributes page to make it easy to share your memories.