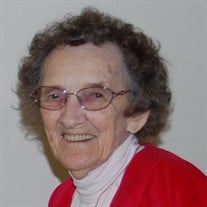 Mellie Elizabeth Stapleton November 13, 1918 – February 17, 2016 Mellie Elizabeth Craig Stapleton, born November 13, 1918 on the family farm near New Hartford, was from a line of pioneer stock dating back to pre-revolutionary war Pennsylvania. Her family has been in Missouri since the 1830s. Mellie was the youngest of three children of Ernest Sharp Craig and Myrtle Lee Reed Craig. Growing up, Mellie and her two older siblings would ride their horse to New Hartford School. She graduated from Bowling Green High School. Her first son, Billy Joe Hays, was raised in the Craig home while Mellie finished high school and later went to St. Louis to work as a supervisor at a small arms plant in St. Louis during World War II. After the war Mellie returned home to New Hartford and on July 5, 1946, married local resident and returning veteran, Phillip Norton Stapleton. Lifelong New Hartford residents, their marriage resulted in seven children, Phillip Andrew, Daniel Sylvester, Patsy Lea and Paula Lynn, Jean and June and Carolyn Joy Stapleton. After the death of Norton in 1964, Mellie raised their six children, all sixteen-years-old or younger, virtually by herself in New Hartford. She was strict not only to her own children but with other youngsters in the community as well. To be sure, she held her children to her own strict code of expectations. Her efforts paid off. Mellie was a creative person who loved working with her hands. She was a quilter, tatter, knitter, crocheter, gardner and clothes maker. She handmade outfits for her girls and gave the boys haircuts. She was involved in school activities in New Hartford and was active in local women’s groups. She also worked as Assistant Post Mistress at New Hartford Post Office and as substitute-driver for the local mail route. Mrs. Stapleton remained in her home in New Hartford into her nineties until a series of physical setbacks necessitated her move to the Moore-Pike Nursing home in Bowling Green. She lived there until suffering a stroke on February 12. She died at Pike County Memorial Hospital on February 17, 2016 at age ninety-seven. Mellie was more than a mother and housewife. She cared deeply for people and always tried to coax them to their potential. She loved growing flowers, craftwork and especially talking about her family. Although small, she was mighty, and would tackle about any task from wrestling with a garden tiller to stripping and refinishing furniture. As a member of that “Greatest Generation” she was innovative, liberal and actively involved in life. She was an inspiration for many. Her influence will be sorely missed yet at the same time, remains evident in those she left behind. As the last of her family generation Mellie related many of the stories and histories of her family. Her mind remained sharp until her death and she could recall names and dates that had escaped many of us. She was preceded in death by her parents, Ernest and Myrtle; husband, Norton; brother, Johnny Reed Craig; sister, Lucille Butler Motley Bishop; son, Billy Joe Hays; daughter, June Stapleton; and daughter-in-law, Ann Ruether Stapleton. Survivors include daughter-in-law, Betty Hays of Vandalia, Phillip (Mary) Stapleton of Louisiana, Dan Stapleton of Columbia, Patsy Stapleton of Chesterfield, Paula Brown of Hannibal, Jean Raveill (Tom) of Blue Springs, Joy Stapleton of Mehlville and many grandchildren, great-grandchildren, great-great grandchildren, and great-great-great grandchildren. In our mind, we can see her reunited with all of her loved ones, knitting furiously and, of course, talking about her family members who remain behind. Visitation will be held Tuesday, February 23, from 5:00 until 7:00 p.m. at the Bibb-Veach Funeral Home in Bowling Green. A memorial service will be conducted Wednesday morning at 10:00 a.m. at the funeral home by Rev. Bob Haynes with burial in the Keith Cemetery at New Hartford. In lieu of flowers donations can be made to the Keith Cemetery.

The family of Mellie Elizabeth Stapleton created this Life Tributes page to make it easy to share your memories.

Send flowers to the Stapleton family.