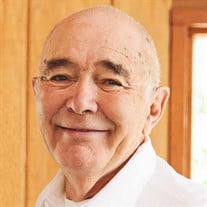 Melvin (Mel) Hall , 74 passed away Wednesday, December 7, 2016 at the Harry S. Truman Veterans Hospital in Columbia. Memorial services will be held at 11:00 am Friday, December 16, 2016 at the First Presbyterian Church in Bowling Green with Pastor Judy King officiating. Final disposition will be in the Resthaven Cemetery in Chillicothe. Mel was born on March 30, 1942 in Omaha, NE, the son of Melvin W. and Katherine Loesch Hall. As a child he lived in Iowa and then moved to Chula, Mo. where he attended the Manning Country School and then graduated from Chillicothe High School. He received his Bachelor of Science degree in Farm Mechanization from the University of Missouri. All through his growing up years he assisted his dad in farming and running the dairy routes where they would haul the milk from the dairy farms to the dairy plants in Chillicothe and Kansas City. He served in the United States Navy during the Vietnam Conflict. Upon returning home, Mel then married Doris Harris on January 12, 1969 in Carrollton. They later moved to Columbia where he worked at the Missouri University Sinclair Research Farm. In 1970 he moved back to Chillicothe to run the family dairy route business and own and operate Hall’s Welding and Machine. In 1978 he went to work as a regional manager for Gehl and then White Equipment until going to work for Feeders Grain in 1985 where he worked until his retirement in January 2008. Mel enjoyed volunteering at the First Presbyterian Church in Bowling Green where as a member he served as a deacon, elder, maintaining the church facilities and served on JAMPAC. He loved woodworking, reading, computer games, drinking coffee with his buddies, fixing anything that needed fixed and enjoyed helping people with anything that needed cared for. His family include his wife Doris of Bowling Green; son Michael Hall and wife Angie of Columbia; daughter Brandi Hall and husband Peter Rice of El Jabel, CO; two grandchildren Jacob and Mya Hall of Columbia; brother Scott Hall and wife Marty Berggren of Kearney; nephew Patrick Hall Jones and niece Megan Joan Hall of Chillicothe. He was preceded in death by his parents; sister Nancy Jones and brother Doug Hall. Memorials may be made to the First Presbyterian Church.

Melvin (Mel) Hall , 74 passed away Wednesday, December 7, 2016 at the Harry S. Truman Veterans Hospital in Columbia. Memorial services will be held at 11:00 am Friday, December 16, 2016 at the First Presbyterian Church in Bowling Green with... View Obituary & Service Information

The family of Melvin Hall II created this Life Tributes page to make it easy to share your memories.