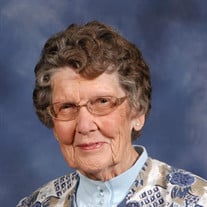 Mercedes Amelia Behlmann, 96, of Bowling Green passed away Wednesday, July 14, 2021 at Lynn’s Heritage House in Louisiana, Missouri. A Mass of Christian Burial will be held Friday, July 23, 2021 at 10:00 a.m. at St. Clement Catholic Church with Fr. Henry Ussher and Deacon Wayne Korte officiating. Burial will be in St. Clement Cemetery. Visitation will be from 4:00 to 8:00 p.m. on Thursday, July 22, 2021 at Bibb-Veach Funeral Homes and Crematory in Bowling Green. Mercedes was born on August 3, 1924 to Clarence Herman and Elizabeth Catherine Haselhorst Huhman in Osage Bend, Missouri. She was united in marriage on August 20, 1947 to Elmer Behlmann at St. Clement Catholic Church. He preceded her in death on November 22, 2006. Mercedes grew up around Jefferson City, eventually relocating to Bowling Green, where she graduated from Bowling Green High School in 1942. Mercedes was a devoted member of St. Clement Catholic Church; which also included the Ladies Sodality, the church quilt group, the St. Clement Homemakers’ Club, and contributing to the efforts of the Shrine of Mary. Elmer had often said that Mercedes would jump off the roof of the church if someone had called and asked her to do so. Mercedes enjoyed quilting, playing Bunco and working in her flower beds. She always enjoyed her trips with Emma Jo Niemeyer; cruises, Las Vegas and New York. Mercedes was well known for her cake decorating skills. She has made many birthday and wedding cakes over the years. She shared her talent with many as she taught cake decorating to local 4-H students, as well as sewing. She was also famous for her homemade rolls, which were served at nearly every dinner held at the Knights of Columbus Hall. Mercedes’ favorite pastime was spending time with her family in whatever way they could. Her family meant the world to her and brought her so much joy. Mercedes will be greatly missed by all who were blessed to be part of her life. Mercedes is survived by son, Roy Behlmann (Marilyn) of Bowling Green; daughter, Amy Griffin (Sean) of Overland, Missouri; grandchildren: Tasha Wiler (Nico Basel), Will Wiler (Makayla), Virgil Jones (Shaleigh Mooney), Leigh Jones (Jason Lester), Nicole Ganger (Tim), Sara Behlmann Manaska (James), and Tyler Behlmann (Mallory); sixteen great-grandchildren; brother, Clarence Huhman, Jr. of Atlanta, Georgia; sister, Nancy Brakhage of Columbia, Missouri; and many nieces and nephews. She was preceded in death by her parents; husband, Elmer; grandson, Hunter Behlmann; son-in-law, Boots Wasson; and sisters, Kathy Rodgers and Grace Suthoff. Pallbearers will be Marie Korte, David Brakhage, Steven Huhman, Bill Suthoff, Ronnie Twellman, Kyle Luebrecht, Justin Luebrecht, and Chris Rodgers. Honorary pallbearers will be her grandchildren. Memorials may be made to St. Clement Catholic Church, St. Clement Ladies Sodality, or the St. Clement Quilters.

The family of Mercedes Amelia Behlmann created this Life Tributes page to make it easy to share your memories.

Send flowers to the Behlmann family.