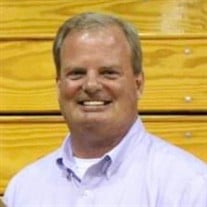 Francis Michael McCrory, 64, passed away Tuesday, October 6, 2020. A memorial mass will be held on Saturday, October 10 at St. Clement Catholic Church with Fr. Lou Dorn officiating. Visitation will be held on Friday, October 9, 2020 from 4:00-8:00 p.m. at Bibb-Veach Funeral Home in Bowling Green. Mike was born on September 11, 1956 in St. Louis, MO to Frank and Pat McCrory. He was united in marriage to his loving wife Karen Lynn Henderson on November 28, 1980 at St. Clement Catholic Church. She survives. He is also survived by his son, Matt (Lauren) of Troy, MO and their children Leo (9), Seamus (5) and Whitman (3); daughter Taylor Preston (Shane Henderson) of Bowling Green, MO and her children Dylan (14), Emma (13) and Bryson (9); and daughter Paige Brock (Cody) of Stet, MO and their children Chesney (4) and Bellamy (1). Also surviving are his brothers John (Marilyn) and Matt (Lisa) McCrory and their families. Mike was preceded in death by his loving parents Frank and Pat McCrory who instilled in him a passion for livestock and a deep faith in Christ. Mike made friends where ever he went. Throughout his youth he became active in 4H and FFA at Clopton High School, graduating in 1974 and then went onto attend University of Missouri Columbia where he was a member of Farmhouse Fraternity. Through Farmhouse, Mike acquired numerous lifelong friends. In 1979, he graduated with a degree in Animal Husbandry. He returned home to Clopton High School, where he became devoted to investing his time and talents into building character, self-esteem and relationships with thousands of Clopton FFA members. His love of Clopton athletics also led to valuable friendships with other coaches and created lasting memories on and off the court. No matter the jersey or the blue jacket, Mike was there to make a difference. He did not see FFA contests or games as competitions, but instead as a celebration of youth and their abilities. Mike shaped lives at Clopton High School for 33 years. After his retirement, Mike soon realized that he could not give up his love of teaching and promoting agriculture. Mike began his “victory lap” teaching at Elsberry FFA and spent 3 years encouraging students and building relationships. In the past few years he enjoyed providing more service to the community, while being a key contributor to the Hospice board, Farm Bureau, Knights of Columbus, Cursillo, and establishing adult agricultural education classes at the Pike-Lincoln Technical Center. Mike cherished the time that he spent with his grandchildren, teaching them the importance of caring for animals and taking pride in their work. Mike loved being on the farm with his children and grandchildren, but ultimately spending time as a family is what gave him the greatest joy. His friends and family will always celebrate Mike’s joyful outlook on life and his compassion for helping others. Mike will truly be missed by all that knew him! Memorials may be made to the Pat and Mike McCrory Memorial Scholarship Fund.

The family of Mike McCrory created this Life Tributes page to make it easy to share your memories.

Send flowers to the McCrory family.