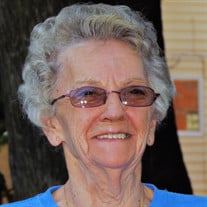 Muriel Hogue, 83, of Bowling Green, Missouri passed away on March 22, 2017 at her home. Visitation will be March 28, 2017 from 9 a.m. – 12 p.m. at Bibb-Veach Funeral Home in Bowling Green. Funeral services will be held at the funeral home at 12 p.m. with Rev. Don Amelung officiating. Burial will be in the Evergreen Memorial Cemetery in Vandalia. Muriel was born Feb. 2, 1934 in Perryville, Missouri, the daughter of Timon Oliver and Clara (Allgire) Morrison. While working at her family’s feed store in Ashley, she met Gentry Wayne Colbert when he came in to purchase grain. They married on August 2, 1952 at the St. Clement Catholic Church. He preceded her in death on August 28, 1985. Muriel loved music and dancing. Most weekends after retirement, she attended community dances in the area with her friends. It was at these dances where she met Bobby Gene Hogue of Vandalia. They were married on July 25, 2000. He also preceded her in death on November 11, 2003. Survivors include her son Mike (Donna) Colbert of Bowling Green and daughter Phyllis (Mark) Marion of St. Louis; seven grandchildren - Mike (Amy) Colbert; Lindsay (Tom) Thompson; Billy Hays; Lauren Hunt (Brian Brandenburger); David (Alisha) Hays; Luke (Brooke) Colbert; Nicole Marion (Tyler Norman); 19 great-grandchildren; and many nieces and nephews. She was preceded in death by her parents, husbands, and 9 brothers and sisters. During her life, Muriel spent many years in Bowling Green working as a florist, a police dispatcher, and as a clerk at Shell service stations. In retirement and in her spare time, she enjoyed drinking coffee and eating out with friends and working around her house and yard. Most of all, she enjoyed time with her children and grandchildren and the St. Louis Cardinals! Serving as pallbearers will be grandsons Mike Colbert, David Hays, Luke Colbert; great-grandsons Ben Colbert and McCoy Thompson and nephew Stan Wendel. Memorials may be made in memory of Muriel Hogue to Pike County Home Health and Hospice, 1 Health Care Place, Bowling Green, MO 63334, or online at www.pikecountyhealth.org/hospice/foundation.html.

The family of Muriel Mae Hogue created this Life Tributes page to make it easy to share your memories.

Muriel Hogue, 83, of Bowling Green, Missouri passed away on March...

Send flowers to the Hogue family.