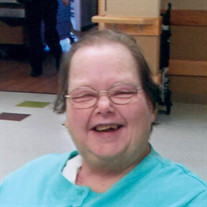 Myrna Lee Schwendemann, age 59, of Silex passed away June 23, 2017 at the Elsberry Health Care Center in Elsberry. Funeral services will be held 10:00 a.m., Monday, June 26, 2017 at the St. Alphonsus Catholic Church in Millwood with Fr. Chuck Tichacek officiating. Burial will be in the St. Alphonsus Cemetery in Millwood. Visitation will be held from 4:00 – 8:00 p.m., Sunday, June 25, 2017 at the Knights of Columbus Hall in Millwood. Myrna was born March 6, 1958 in St. Charles the daughter of Anthony Lawrence and Clara Margaret Boschert Schwendemann. Survivors include four brothers Thomas A. Schwendemann (Margaret) of Silex, John J. Schwendemann (Jill) of Manchester, Frank Charles Schwendemann of Frankford, Patrick G. Schwendemann of Silex; two sisters Melanie A. Wasielewski of Foristell, and Marietta K. Fowler (Jack) of St. Paul; numerous nieces, nephews and cousins. She was preceded in death by her parents, and one brother Robert Joseph Schwendemann and wife Ann; and brother-in-law William Wasielewski. Myrna lived in St. Peters until she was 13 then lived in the Millwood area for the remainder of her life. She went to St. Alphonsus Catholic School and graduated from Troy High School in 1978. She worked at the Lincoln County Sheltered Workshop for 23 years. Myrna was a member of the St. Alphonsus Catholic Church, enjoyed playing cards, writing recipe cards, watching Wheel of Fortune, listening to music and loved kids. Above all she loved her family very much. Pallbearers will be Anthony Wasielewski, Todd Wasielewski, Eric T. Fowler, David A. Fowler, Sean Schwendemann, Michael Schwendemann, Aaron Schwendemann, and Alex Schwendemann. Honorary pallbearers will be Phillip Schwendemann and Kevin Schwendemann. Memorials may be made to the Elsberry Health Care Center, the St. Alphonsus School, or the Lincoln County Home Health and Hospice.

The family of Myrna Lee Schwendemann created this Life Tributes page to make it easy to share your memories.

Send flowers to the Schwendemann family.