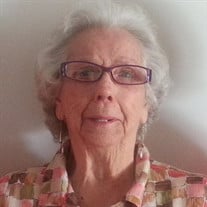 C. Naomi Wendel, age 88 of Vandalia, formerly of Bowling Green, passed away Monday, February 27, 2017 at the Tri-County Care Center in Vandalia. Funeral services will be held at 12:00pm on Thursday, March 2, 2017 at the Bibb-Veach Funeral Home in Bowling Green with Fr. Bill Peckman officiating. Burial will be in the St. Clement Cemetery. Visitation will be held from 9:00am until 12:00pm on Thursday at the funeral home. Naomi was born March 13, 1928 in Pevely, MO, the daughter of Oliver T. and Clara Allgire Morrison. She married Clarence T. “Slick” Wendel October 28, 1947 at St. Clement Catholic Church. He preceded her in death May 18, 2005. Survivors include sons Kevin Wendel (Cara) of Oak Grove and Stanley Wendel (Leah) of Vandalia; daughter Sandra Runkle of Jacksonville, IL; daughters in law Betty Jo Wendel and Linda Wendel; 18 grandchildren; 31 great grandchildren; numerous great-great grandchildren; sister Muriel Hogue of Bowling Green; many nieces and nephews. She was preceded in death by her parents, husband, sons Jerome, Gary and Tom; 8 brothers and sisters. Naomi’s family moved around the state during her childhood and settled in Ashley. After she and Slick married she along with her husband owned and operated Wendel Construction from 1950 until 1987 and Wendel Building Supply from 1960 until 1987. She enjoyed bowling, following the St. Louis Cardinals, going to drink coffee with her friends and going out to eat. Most of all, she enjoyed time with her children and grandchildren. Serving as pallbearers will be Brad Besterfeldt, David Wendel, Shad Wendel, Scott Cogswell, Derek Wendel, Chad Callicott and Wade Gamm. Memorials may be made to the Alzheimer’s Association or the American Diabetes Association.

C. Naomi Wendel, age 88 of Vandalia, formerly of Bowling Green, passed away Monday, February 27, 2017 at the Tri-County Care Center in Vandalia. Funeral services will be held at 12:00pm on Thursday, March 2, 2017 at the Bibb-Veach Funeral... View Obituary & Service Information

The family of Naomi Wendel created this Life Tributes page to make it easy to share your memories.

Send flowers to the Wendel family.