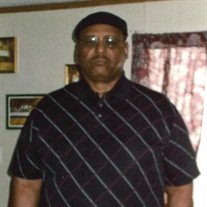 Nathaniel Florence, Jr., 69, of Bowling Green, passed away Monday, May 31, 2021 at his home. Funeral services for Nathaniel will be held Saturday, June 5, 2021 at 1:00 p.m. at Bibb-Veach Funeral Homes and Crematory in Bowling Green with Rev. Albert W. Lawson officiating. Burial will be in Memorial Gardens Cemetery in Bowling Green. Visitation will be from 12:00 p.m. until the time of services on Saturday, at the funeral home. Nathaniel was born February 8, 1952 in Louisiana, Missouri to Nathaniel Florence, Sr. and Ruby Hobbs. He was united in marriage to Geanna Blair on July 3, 1977. To this union 2 children were born, and 4 step-children were received. Nathaniel grew up in Bowling Green and was a 1970 graduate of Bowling Green High School. While in school, he participated in football, basketball, and shot put in track. After graduation, Nathaniel enlisted in the United States Navy. He served from June 1971 to June 1977, serving during Vietnam as an Aviation Boatswain’s Mate upon the USS Ranger (CVA-61). After returning from the service, Nathaniel began working for Hercules in Louisiana, and later Dura in Hannibal. He went to work at N.E.C.C. in Bowling Green when it opened and he retired from there after 16 years in the Maintenance Department. Nathaniel enjoyed fishing and hunting, mushroom hunting, and BBQing for his family and the Masonic Lodge. He loved his family; especially his grandchildren. Nathaniel is survived by his son, Michael Blair of St. Charles; daughter, Shanna Florence of St. Charles; step-daughter, Lisa Blair of Alabama; grandchildren: Jaida Blair, Zavion Blair, Mikaliegh Blair, and Anasia Poston; brothers Robert Bell, Jr. (Shellia) and Gary Bell (Lisa Ann); sisters: Tonya Hendrix, Marcia Hammers, Carolyn White (Jimmy), Jane Nalley (Darell), Stephanie Bell, and Ebony Bell; special friend, Brenda Gollaher; and a host of nieces, nephews, and cousins. He was preceded in death by his parents; and siblings: Carol Bell, who passed at birth, Marcile McQuay, Lorina Bell, and Ronnie Florence; and step-children: Derrick Blair, Kyle Blair and Theresa Blair. Memorials may be made to the donor’s choice.

Nathaniel Florence, Jr., 69, of Bowling Green, passed away Monday, May 31, 2021 at his home. Funeral services for Nathaniel will be held Saturday, June 5, 2021 at 1:00 p.m. at Bibb-Veach Funeral Homes and Crematory in Bowling Green with Rev.... View Obituary & Service Information

The family of Nathaniel Florence Jr. created this Life Tributes page to make it easy to share your memories.

Send flowers to the Florence family.