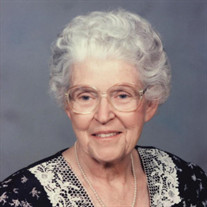 Nellie Sue Pritchett Shaw passed away Tuesday, October 13, 2020 at Maple Lawn Nursing Home in Palmyra, Missouri Private graveside services will by held Friday, October 16th at Fairview Cemetery with Rev. Gail Aurand officiating. Nellie was born April 19, 1926 in Frankford, Missouri to Elmo and Thelma Scott Pritchett. On April 23, 1950 she was united in marriage to Emmett Shaw. This union was blessed with three children: Elmo Shaw of Frankford; Stephen (Cheryl) Shaw of Frankford; and Lynn (Dennis) Neff of Dawson, Illinois. Also surviving are grandchildren: Jordan Shaw, Sarah Kliethermes (Brandon), Emily Bibb (Michael), Scott Neff (Débora), and Lance Neff; great-grandchildren: Maren, Caleb, and Shawn Kliethermes; and a sister, Jonann Hamilton of Warner Robins, Georgia. Nellie was preceded in death by her parents; her husband; a brother, Sutro Pritchett; and a sister, Nancy Shannon. Nellie was a member of the Frankford Christian Church since 1940, where she served as a Sunday School teacher, Sunday School Superintendent, and Deaconess. She enjoyed helping with church projects, such as the Festival of Sharing. While in school, Nellie enjoyed playing softball. She was a life-long fan of the St. Louis Cardinals. Nellie attended the University of Missouri, Columbia, where she earned her degree in Home Economics Education. She later received her degree in Science. She taught Home Economics and Science at Frankford High School and Bowling Green Junior High and Middle School for 30 years, retiring in 1995. Her sincere interest in young people was her inspiration in teaching and serving as a 4-H leader for many years. Nellie also participated in the Frankford quilting group and made many quilts for her children and grandchildren. She also enjoyed helping on the family farm in her free time. Memorials may be made to the Frankford Christian Church, P. O. Box 102, Frankford, MO 63441.

The family of Nellie Sue Shaw created this Life Tributes page to make it easy to share your memories.

Send flowers to the Shaw family.