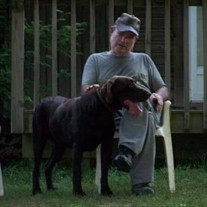 Oliver Allan Staton, 76, of Bowling Green, passed away January 20, 2020 at the Harry S. Truman VA Hospital in Columbia, Missouri. Funeral services will be held at 12:00 p.m. Monday, January 27, 2020 at Bibb-Veach Funeral Home in Bowling Green. Burial will be in New Harmony Cemetery. Visitation will be from 10:00 a.m. to 12:00 p.m. on Monday at the funeral home. Allan was born June 4, 1943 to Oliver Anderson and Lillian Arline Fisher Staton in Louisiana, Missouri. On July 12, 1968 he married Sharon Sue Welborn. She preceded him in death on October 7, 2002. In 2014 he married Sandy K. Mix. She preceded him in death on January 4, 2020. Allan is survived by sons Jeffrey Allan Staton (Jim Chmiel) of Louisville, Kentucky and Jasen Staton (Tina) of Murfreesboro, Tennessee; and daughter Julee Harlan (Scott) of Silex, Missouri. He is also survived by 2 grandchildren, Landon Harlan and Carson Harlan, and sisters Lydia Parker (Cleve) of Murfreesboro, Tennessee and Peggy Howse (Gerry) of Smyrna, Tennessee, as well as step-children, step-grandchildren and step-great-grandchildren. He was preceded in death by his parents, and both wives. Allan grew up in Curryville and graduated from Bowling Green High School. He was drafted in to the U.S. Army on August 10, 1965 and served during the Vietnam War. When he was discharged on June 13, 1967 he returned home and helped his father build houses in Vandalia. He also spent a few years in Clarksville before returning to Bowling Green. He was employed at Holcim as Preventive Maintenance for 39 years until retiring in 2006. He enjoyed having his coffee at Crystal’s every morning. He also enjoyed collecting dye-cast vehicles, watching WWE, and attending car shows. He was a Kansas City Chief fan. He loved spending time with family and pets. Pallbearers will be Jeff Staton, Jasen Staton, Anderson Parker, and Travis Mack. Memorial may be made to the New Harmony Cemetery.

The family of Oliver Allan Staton created this Life Tributes page to make it easy to share your memories.

Send flowers to the Staton family.