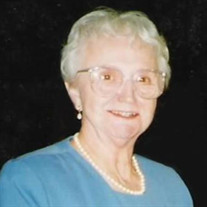 Mrs. Lucille Lindsay of Eolia completed her journey on this earth and joined her heavenly family on June 29, 2020. She was 95 years old. Funeral Services for Lucille will be held at 11:30 on Friday, July 3, 2020 at Indian Creek Baptist Church, with Rev. Joe Miller officiating. Visitation will be held from 9:00 -11:00 a.m. on Friday at Bibb-Veach Funeral Home in Bowling Green. Ora Lucille Colbert was born May 11, 1925 to Edgar M. and Lucy Fay Halley Colbert. She attended Henton School in Lincoln County for two years, then Silex School, graduating in 1943. On August 23, 1947 she was married to Wayne Lindsay, and they were blessed with three children; Beverly, Dale, and Edgar. Upon graduating from high school in 1943, Lucille attended college at Hannibal LaGrange College, and also began teaching at Oak Grove, a one-room school in Lincoln County. Over the next 20 years she taught school, raised her family, and attended college as time allowed, including many night and summer classes. She earned her Bachelor of Science in Education Degree from the University of Missouri in 1963, and her Master’s Degree from MU in 1976. Besides teaching at one-room schools early in her career, she also taught at Hawk Point and Silex, serving as the Elementary Principal at Silex from 1973 to 1985. In 2015, Lucille was awarded a Pioneer in Education Award from the Missouri Education Department. Lucille was a life-long member of Indian Creek Baptist Church where she filled many roles over the years; including Sunday School teacher, pianist, and treasurer. She was an avid gardener, quilter, cook, artist and St. Louis Cardinals fan, and loved to entertain family and friends in her home. Surviving are her children; Beverly (Ralph) Twellman of Columbia, Dale Wayne (Judy) Lindsay of Eolia, and Edgar (Sally) Lindsay of Eolia. Also surviving are six grandchildren: Andy (Sally) Twellman, Julie (Blake) Ewing, Nick (Leslie) Lindsay, Matt (Heather) Lindsay, Mark (Ashley) Lindsay, and Michael Lindsay; and 12 great-grandchildren. Lucille was preceded in death by her parents; her husband of 56 years, Wayne; her sister, Evelyn Colbert Logan; and her great-granddaughter, Myla Grace Lindsay. Pallbearers will be Andy Twellman, Nick Lindsay, Matt Lindsay, Mark Lindsay, Michael Lindsay, and Cecil Thayne Logan. Memorials may be made to Indian Creek Baptist Church, Indian Creek Cemetery, The Hope Center, or Pike County Hospice.

Mrs. Lucille Lindsay of Eolia completed her journey on this earth and joined her heavenly family on June 29, 2020. She was 95 years old. Funeral Services for Lucille will be held at 11:30 on Friday, July 3, 2020 at Indian Creek Baptist Church,... View Obituary & Service Information

The family of Ora Lucille Lindsay created this Life Tributes page to make it easy to share your memories.

Mrs. Lucille Lindsay of Eolia completed her journey on this earth...

Send flowers to the Lindsay family.