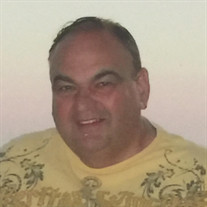 Orville M. Zumwalt Jr., “Bud”, 61, of Eolia, succumbed to complications from liver disease on Sunday, April 24, 2016, at St. Louis University Hospital surrounded by his loving family. A memorial service will be held in his honor from 4 pm-7 pm on Thursday, April 28th, at the Assembly of God Church at 1154 Highway E in Silex with Eloise Slaughter, his sister, officiating. Bud is survived by his beloved wife of 41 years, Diana Lynn Zumwalt, and two sons, Brian Zumwalt and wife, Christina, of Fair Grove, and Chris Zumwalt and wife, Shawnda, of Whiteside, and 5 grandchildren; Tyler, Sabrina, Logan, Cooper, and Emily. In addition, Bud is survived by his five sisters and one brother: Eloise, Barbara “Bobbie”, Mary Kay, Bonnie, Karen, and George. He was preceded in death by his parents, Orville M. Zumwalt and Laura Marjorie Zumwalt, and twin sisters, Mildred and Milly. Also, a special thanks to Jessica Zumwalt for all of the help she provided during this challenging time. Bud was born on November 10, 1954, in Louisiana, MO, to Orville and Laura Marjorie Zumwalt. He was a successful sales manager for a construction company for about 22 years before his illness forced an early retirement. When able, he enjoyed spending time on the water fishing and boating, working outside in his garden, reading, and spending time with his many friends, family, and grandchildren. Bud was known for his quick wit and great sense of humor. He was an important part of not only his family, but also his community. In lieu of flowers, the family requests donations be made to the American Liver Foundation, c/o Bibb- Veach Funeral Home or at www. liverfoundation.org, the Assembly of God Church or to the Clopton Alumni Association. Services will be under the direction of Bibb-Veach Funeral Home.

Orville M. Zumwalt Jr., &#8220;Bud&#8221;, 61, of Eolia, succumbed to complications from liver disease on Sunday, April 24, 2016, at St. Louis University Hospital surrounded by his loving family. A memorial service will be held in his honor... View Obituary & Service Information

The family of Orville Zumwalt created this Life Tributes page to make it easy to share your memories.

Send flowers to the Zumwalt family.