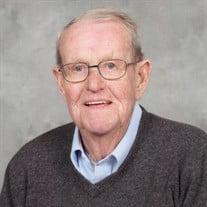 Paul Jerome “Jerry” McDannold, age 82, of Bowling Green, passed away at his residence on Friday, March 17, 2017. A Mass of Christian Burial will be held at 10:00 am on Tuesday, March 21, 2017 at the St. Clement Catholic Church with Fr. Bill Peckman officiating. Burial will be in the St. Clement Cemetery. Visitation will be held from 4:00pm until 8:00pm on Monday at the Bibb-Veach Funeral Home in Bowling Green. Jerry was born October 12, 1934 in Eolia, the son of John H. and Elizabeth Agee McDannold. On October 18, 1958 he married Ruth Scherder at St. Clement Catholic Church. She preceded him in death in 1999. Survivors include daughters Mary Jo (Phil) Ashley of Little Rock, AR, Cindy McDannold of St. Louis, Susan (Steve) Mudd of Bowling Green; son John (Elaine) McDannold of Bowling Green; grandchildren Lauren (Hunt) Taylor of Maumelle, AR, Daniel (Caren) Williams of Little Rock, AR, Collin (Alex) Reischman of St. Louis, Andrew Mudd, Avery Mudd, Matthew McDannold, Aidan McDannold and Jack McDannold all of Bowling Green; many nieces and nephews. Jerry was preceded in death by his wife, parents, siblings Robert, Billy, Sully, Betty and Jim, as well as his brothers and sisters-in-law. Jerry attended school in Eolia and was one of the last classes to graduate from Eolia High School. During his high school years he was well-known throughout the area for his excellent basketball skills. As a young man he served in the United States Army Reserves and enjoyed playing baseball on local teams. Jerry learned the skill of carpentry at a young age from his good friend and surrogate uncle, Minor Lewis. He enjoyed using those skills throughout his lifetime not only as a career, but by making furniture and other items. For many years he was a Union Carpenter and later worked for Hercules, from where he retired in 1997. Jerry belonged to the St. Clement Catholic Church and was a member of the Knights of Columbus. Jerry was known for his humor and playing jokes on people. His favorite retirement past time was driving the countryside and taking in all the happenings. He will be missed by his family and friends, particularly his “coffee group” at MeMe’s. Serving as pallbearers will be his nephews Jim McDannold, Roger McDannold, Bruce Scherder, Keith Scherder, Stephen Scherder and Eugene Korte. Memorials may be made to the St. Clement Church 21509 Hwy 161 Bowling Green, MO 63334.

The family of Paul Jerome "Jerry" McDannold created this Life Tributes page to make it easy to share your memories.

Send flowers to the McDannold family.