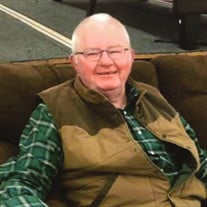 Paul Edward Richards, age 75, of Holts Summit, MO, passed away Tuesday, March 23, 2021 at the Harry S. Truman Memorial Veterans Hospital in Columbia, MO. Funeral services will be held at 11:00 am on Wednesday, March 31, 2021 at the Bibb-Veach Funeral Homes & Crematory in Bowling Green, MO with Joe Gibson officiating. Burial will be held at Salem Cemetery in Center, MO with Military Honors being conducted by VFW Post #5553 and Missouri Military Honors. Visitation will be held on Wednesday from 9:00 am until time of services at the funeral home. A memorial service will be held at 10:00 am on Saturday, April 3, 2021 at the New Bloomfield Christian Church with Joe Gibson officiating. Paul was born July 28, 1945 in Shelbina, MO, the son of Paul Richards and Hazel Marjorie (Knapp) Henry. He grew up and attended Shelbina schools. At the age of 17 he enlisted in the United States Army and although he entered just as the Korean War had ended, he spent time in Korea and was honorable discharged in 1964 and served in the United States Army Reserves until 1968. On November 12, 1965 he married Etta Louise Jennings at the First Christian Church in Bowling Green and together they have loved and shared 55 years and two children. Survivors include wife Louise Richards of Holts Summit; son Paul Travis Richards of Holts Summit; daughter Emily Sue Hannaford (Adam) of Wildwood, MO; granddaughter Lilly Brook Richards of Holts Summit; brother Buddy Richards of Shelbina; sisters Carolyn Fontenot of Houston, TX and Rosalee Frisbee (Claude) of Burlington, IA. Also surviving are many extended relatives. Preceding him in death are his parents and mother-in-law Areline Jennings. Paul spent the majority of his working years as an over the road truck driver, trucking for over 23 years and logging over 1 million miles for which he received a plaque. He worked for Archie Holt in Vandalia, Orscheln Bros. Truck Line, and Overnight Transportation. At that time, he became disabled and was forced to stop driving, but that didn’t stop his determination to work. He just shifted gears and became an entrepreneur doing everything from landscaping to scrap metal. In is spare time Paul could be found spending time with his family and casting a line in the lake. He especially enjoyed fishing with his brother Buddy at Shelbina Lake. Family vacations were spent driving to South Dakota and Wyoming and Paul wouldn’t complain that he had to drive either. The only states Paul hadn’t visited were Montana and Alaska. Paul enjoyed relaxing, watching old John Wayne movies and MASH, while enjoying one of his favorite snacks; candy orange slices or chocolate covered cherries. If you had the chance to visit with Paul you likely heard him tell ya “Glad you got to see me!” Paul was loved by many and will be missed by all. Serving as pallbearers will be Travis Richards, Adam Hannaford, Justin Walker, Tony Werdehausen, Scott Werdehausen, and Eric Walker. Memorials may be made to the New Bloomfield Christian Church.

Paul Edward Richards, age 75, of Holts Summit, MO, passed away Tuesday, March 23, 2021 at the Harry S. Truman Memorial Veterans Hospital in Columbia, MO. Funeral services will be held at 11:00 am on Wednesday, March 31, 2021 at the Bibb-Veach... View Obituary & Service Information

The family of Paul Edward Richards created this Life Tributes page to make it easy to share your memories.

Send flowers to the Richards family.