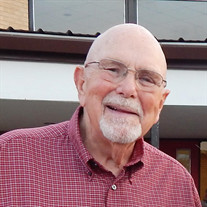 Philip Ray Bibb, Sr., 91, of Bowling Green, went home to be reunited with his wife and his Lord on Monday, Dec. 16, while living at Lynn’s Heritage House in Louisiana. Funeral services will be at 10 a.m. on Saturday, Dec. 21 at the St. Clement Catholic Church with the Fr. Henry Ussher officiating. Burial will follow in the St. Clement Cemetery. Visitations will be from 3-7 p.m. on Friday, Dec. 20 at the Bibb-Veach Funeral Home in Bowling Green. Philip was born June 6, 1928 to Ray and Opal Earl (Burks) Bibb. He exchanged vows with Irene Teresa Scherder in Spokane, Wash., on June 23, 1951. She preceded him in death in 2009. Others left to carry on his legacy include sons, Philip Ray “Buddy” Bibb, Jr. and wife, Peggy, of Bowling Green; Clifford Joseph Bibb and wife, Diane, of Bowling Green; William Burks Bibb and wife, Nancy, of Austin, Texas and Charles Michael Bibb and wife, Rose, of Prairie Village, Kan.; a daughter, Patricia Sue Adams and husband, John, of Columbia, Ill.; along with 15 grandchildren and eight great-grandchildren. He was preceded in death by his beloved wife, parents, an infant son, Joseph Bibb; a brother, Earl Benton “Bennie” Bibb and a sister, Dorothy Krein. Philip was a life-long resident of Bowling Green serving the Lord, his country, his family and his community. He graduated from Bowling Green High School in May of 1946 in what many of us know as the old junior high building. While he was originally a member of the First Presbyterian Church in Bowling Green, the love of his life, Irene, converted him to St. Clement Catholic Church where he spent many years volunteering in the church’s community in addition to his weekly adoration hours. Philip joined the military to serve his country honorably in not one but two branches, United States Army from 1946-1947 and then again in the United State Air Force during the Korean War from 1951-1953. While he served at two different periods in our armed forces, his love for service to his community expanded after his enlistment had come to an end. Philip sat on various committees and boards throughout his life including the Bowling Green R-I School Board for 12 years, which included serving as board president; St. Clement School Board where he also served as president; St. Clement Parish Council where he served as president; Bowling Green Rotary Club where he held the title of president; Bowling Green Planning and Zoning Committee; Bowling Green Public Works Committee; St Clement Knights of Columbus; National Association of Realtors; Missouri Association of Realtors and East Central Board of Realtors. He was also a proud member of VFW Post #5553 where he once held the title of Commander and he took great honor marching with his fellow veterans in local parades. His goal was to always ensure his children and grandchildren were left with a better community when his years of service were over. While Philip maybe remembered largely for his time as Postmaster at the Bowling Green Post Office from 1948-1983, he held many, many jobs afterwards. He sold insurance at Farm Bureau Insurance in 1983 before moving onto Pike County Mutual Insurance in 1984 until his son Buddy took over in 1991. He sold real estate for Suddarth Real Estate from 1991-1995 and then finally retiring after spending some time with J&D Realty. There was another love in Philip’s life, however, and that was Bowling Green Bobcats sports. He loved telling tales of playing basketball in his day. He could always be seen and heard in the stands rooting on his children, grandchildren and eventually even great-grandchildren. When he wasn’t in the stands, he was standing along the courses while his grandchildren ran cross country, yelling louder and prouder than anyone else. The grandchildren who didn’t live in Bowling Green were not immune from his thunderous support. If there was a place for him to sit and cheer on his grandchildren, he did it louder and prouder than anyone else – whether it be in sports, musicals or even band competitions. While in school Philip played the trumpet proudly and three of his grandchildren followed in his footsteps. Outside of his children, grandchildren and great-grandchildren, Philip enjoyed rooting on the St. Louis Cardinals and passed that love on to all in his family. Serving as pallbearers are grandchildren Marianne Everhart, Michael Bibb, Alexander Bibb, Shelby Bibb, Jackson Bibb and Johnny Adams. Honorary pallbearers are the rest of the grandchildren Joey McCollum, Jama Mix, Matt Cohea, Samuel Bibb, Clary Luecke, Audrey Bibb, Emily Stephan, Anna Adams and Kate Adams. In lieu of flowers the family is asking for donations to be made to the St. Clement School or the St. Clement Church.

Philip Ray Bibb, Sr., 91, of Bowling Green, went home to be reunited with his wife and his Lord on Monday, Dec. 16, while living at Lynn&#8217;s Heritage House in Louisiana. Funeral services will be at 10 a.m. on Saturday, Dec. 21 at the St.... View Obituary & Service Information

The family of Philip Ray Bibb Sr. created this Life Tributes page to make it easy to share your memories.

Send flowers to the Bibb family.