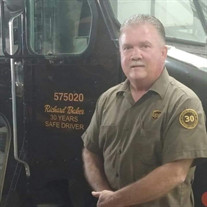 Richard Baker, 60, of Frankford passed away on Sunday, December 27, 2020 at Barnes-Jewish Hospital in St. Louis. He was born November 19, 1960 in Hannibal to Chauncey “Melvin” Baker and Marie (Hubert) Baker. He married Jamie Sorrell on October 11, 1986 in Frankford. She survives. Also surviving are his children; Brandon Baker (Chantel) of Quincy, IL; Jared Baker (Victoria “Paige”) of Frankford; and Paige Nicole Baker of St. Louis; seven grandchildren, Adisyn Baker, Ainslee Baker, Jaidyn Redman, Gerald Redman, Allison Redman, Braxton Baker and Noah Baker. One sister Kimberly Luebrecht (David) of Bowling Green. He was preceded in death by his father; a brother, Melvin “Wayne” Baker; and a granddaughter, Elli Renee Baker. Richard served in the United States Marines from August 1979 to August 1983. He was honorably discharged as a Sergeant E-5. He received various awards including a Good Conduct Medal, Sea Service Deployment Ribbon, and a Meritorious Mast. Richard then began his career at UPS in 1984. He worked various delivery routes from Palmyra to Montgomery City over 31 years. You could give him any address and he would immediately know where it was, who lived there, and how many dogs would be on “attack” mode. Whenever he was near his parent’s home, he would stop to check on them and of course have a second lunch. Richard received a 30 year “Safe Driver” award and was honored in the New York Times. He retired from UPS in November 2015. After quickly becoming bored with retirement, Richard began working for Spring Lake Pork until 2018. He then moved to Pratt, KS to manage a hog facility owned by Lynch Livestock until 2019. Missing his family, he moved back home and began his “dream job” selling cars at Poage Ford in Bowling Green until his untimely death. He loved spending time with his family; especially his grandchildren. He never missed an opportunity to spoil them. His wallet was always open to their desires and sneaking $5 dollars to any grandchild who gave him a hug or a foot rub. Outside of the house, he never met a stranger. He showed his generosity by frequently paying for someone else’s meal while with his family. At Richard’s request and final wishes, there will be no services held. In lieu of memorials, the family asks you to honor Richard by showing kindness to a person in need. Bibb-Veach Funeral Homes in Bowling Green was in charge of arrangements. Online condolences may be left at www.bibbveach.com

The family of Richard Lynn Baker created this Life Tributes page to make it easy to share your memories.

Richard Baker, 60, of Frankford passed away on Sunday, December...

Send flowers to the Baker family.