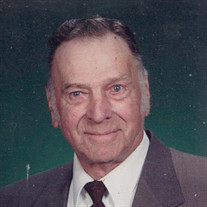 Richard Brooks Branstetter, 94, of Bowling Green, passed away Sunday, April 19, 2020 at the Missouri Veteran’s Home in Mexico. Private graveside services for Richard will be held at the New Harmony Cemetery with Bibb-Veach Funeral Home handling the arrangements. Richard was born April 8, 1926 in Curryville, Missouri to Harve Brooks and Mattie Mae Mitchell Branstetter. He married Erma C. Nelson on March 26, 1947 in Overland, Missouri. She preceded him in death. Richard was a member of the Christian Church in New Harmony, where he served as a deacon. He owned and operated R.B. Branstetter Well Drilling Company and Sawmill near Bowling Green from 1946-1964. He then went to work as a mechanic for Shaon Motors, and later went to work at Chem Grow. He worked as a driller and maintenance supervisor at Dundee Cement Company from January 3, 1967 to June 30, 1986, when he retired. He was a member of VFW #5553, American Legion #370, Pike County Fair Board, Motor Home Clubs, and Boot Kickers. He enjoyed gardening and boot kicking, along with hill billy golf, holey boards, ring toss, and playing cards, especially pinochle. He is survived by son Tommy (Kathie) Branstetter of Bowling Green; daughters, Rebecca Lea (Raymond) Carroll of Bowling Green, Trudy Mae (Bill) Shaw of Bowling Green, and Carrilea (James) Logan of Independence, Missouri; also has 11 grandchildren, 19 great-grandchildren, and 9 great-great-grandchildren; and 2 sisters, Shirley Louise Tredway of Louisiana, Missouri, and Patsy Ann Grange of Tulsa, Oklahoma. He was preceded in death by his parents; wife; brothers Bert, Raymond, John, Elmer, Joe, and Kimmie Branstetter; and sisters Mary Frances Mudd, Ruby Mae Nolan, and Hazel and Rosetta in infancy. Memorials may be made to New Harmony Cemetery or the Missouri Veteran’s Home.

The family of Richard Brooks Branstetter created this Life Tributes page to make it easy to share your memories.

Send flowers to the Branstetter family.