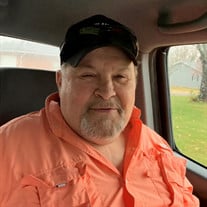 Rickie (Rick) Dean Landers, age 72 of Vandalia, passed away Friday, April 2, 2021 surrounded by his family at his home. Funeral services will be held at 10:00 am on Wednesday, April 7, 2021 at the Bibb-Veach Funeral Home in Bowling Green, MO with Randy McDonald officiating. Burial will be in Laddonia Cemetery. Visitation will be held Tuesday evening from 4:00 pm until 8:00 pm at the funeral home. Rick was born November 25, 1948 in Mexico, the son of Reginald Madison Francis (Pete) and Lois Jean Righter Landers. He grew up and spent all of his years in Vandalia, attending the Van-Far School District. After school, Rick began working in the transportation industry driving trucks. He worked for Oliver Transportation Inc. and Callaway Carriers. He and his brother Rod began Landers Brothers Trucking, later going their own ways while Rick continued trucking under the company name Landers Trucking. During these years Rick became the father of four beautiful girls, to whom he adored. Rick began working for Service and Supply Co-op in Bowling Green in 2006. It was while working here that he met Twila Johnson in 2006. Although, he tried unsuccessfully to gain her interest for a while, in 2011 they began dating and carried on a companionship for his remaining 10 years. Rick is survived by his daughters Melissa Bertalott of Springfield, MO, Lisa Haglund (Mike) of Fulton, MO, Julie Landers of Vandalia, MO, and Jessica Landers of Hallsville, MO; grandchildren Alec Bertalott, Avery Haglund, Aidan Haglund, Noah Haglund, Preston Burnett, Paiyton Burnett, Brendan Hirleman, Jarrett Hirleman, and JayeLynn Hirleman; companion Twila Johnson of Vandalia; brothers Reginald Landers (Kay) of Vandalia, and Keith Landers of Cape Girardeau, MO; aunts Fern Hansen (Bob) and Gloria McKinney (Norm) of Vandalia; nieces, nephews, and cousins. He was preceded in death by his parents; brothers Allen Landers and Roger Landers; granddaughter Madelyn Bertalott. Rick enjoyed working in his yard and gardening. He believed that when it came to his Harley’s, his cars, and his trucks, everything had to shine like it had just came off the showroom floor. As a self-proclaimed master BBQer he would often say “You never tell a man what to do with his grill, even if he’s doing it wrong!” He enjoyed studying, planting, and growing trees. He recently became a lover of YouTube, thanks to his grandson Noah. He and Twila could often be found cruizing in the corvette or truck, going to car shows. When times get tough, you could count on Rick to remind you that “It’s Just Life!” Serving as pallbearers will be Mike Culwell, Doug Mudd, Jeff Graddy, Mike Haglund, Quentin Landers, and Austin Landers. Serving as honorary pallbearers will be Russell Landers, Alec Bertalott, Avery Haglund, Aidan Haglund, Noah Haglund, Preston Burnett, Paiyton Burnett, Brendan Hirleman, Jarrett Hirleman, and JayeLynn Hirleman. Memorials may be made to Laddonia Cemetery or Pike County Hospice.

Rickie (Rick) Dean Landers, age 72 of Vandalia, passed away Friday, April 2, 2021 surrounded by his family at his home. Funeral services will be held at 10:00 am on Wednesday, April 7, 2021 at the Bibb-Veach Funeral Home in Bowling Green, MO... View Obituary & Service Information

The family of Rickie (Rick) Dean Landers created this Life Tributes page to make it easy to share your memories.

Send flowers to the Landers family.