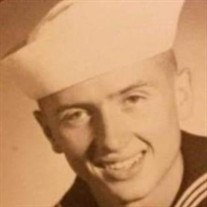 Robert “Bob” Ray Walker Sr. age 90 of Hannibal passed away May 15, 2019 at the Beth Haven Nursing Home in Hannibal. Funeral services will be held 12 pm Monday May 20, 2019 at the Bibb-Veach Funeral Home in Bowling Green. Burial will be in the Laddonia Cemetery. Visitation will be held 10:00 a.m. until time of service Monday at the Funeral Home. Robert was born July 28, 1928 in Fulton the son of Erastus Henry and Hilda Grace Howard Walker. On July 20, 1964 he married Eloise Sharon Van Boening in Bowling Green. She preceded him in death on March 28, 2004. Survivors include children Mike Van Boening (Lois) of St. Charles, Leland Walker (Christine) of Granite City, IL, Robert Walker Jr. (Melissa) of Villa Ridge, Regina Walker DeLaPorte of Hannibal; 8 grandchildren Matt Van Boening (Beth) of Kansas City, Greg Van Boening (Rita) of Solon, OH, Dr. Drew Van Boening of Pueblo, CO, Chris Van Boening (Samantha) of Creve Coeur, Courtney Rhoads of Granite City, IL, Mark Rhoads of Granite City, IL, Daniel DeLaPorte of Hannibal and Rene DeLaPorte of Hannibal; 9 great grandchildren and 2 nephews. He was preceded in death by 3 sisters Marie Schurr, Helen Salesman, Libby Baumgartner and 1 nephew. Robert grew up in Fulton graduating from Fulton High School. He entered the Navy at the end of WWII on July 13, 1946 at the age of 17, and was stationed in Hawaii from 1946-1948. After the war he returned to Fulton and attended Central Methodist for 2 years (1948-1950) in Fayette. Robert was a member of the First Baptist Church in Frankford and attended Calvary Baptist Church. Robert began his grocery career in Fulton then moved to Bowling Green and worked as a produce clerk for Kroger’s until retiring in 1990. During his grocery career he also worked at the Krogers in Vandalia, Troy and Louisiana. Robert moved to Curryville in 1973, then the Vandalia family farm in 1984 and in 1992, they returned to Bowling Green where he joined his wife as a cook at the St. Clement School until 1999. He enjoyed retirement, traveling, spending time with family, and was a founding member of the “Hugateers,” a widowed men’s group who gathered for coffee at the local breakfast establishments. In 2015 he entered the Beth Haven Nursing Home where he remained until his passing. Memorials may be made to Disabled American Veterans, Honor Flight or Donors’ Choice. Pallbearers will be Matt Van Boening, Greg Van Boening, Drew Van Boening, Chris Van Boening, Daniel DeLaPorte and Mark Rhoads.

The family of Robert "Bob" Walker created this Life Tributes page to make it easy to share your memories.

Send flowers to the Walker family.