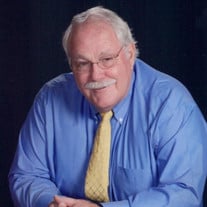 Robert Earl McKee, 76, of Bowling Green, was called home to be with Jesus on June 17, 2020. After a courageous battle with cancer, he passed away peacefully in his home surrounded by his family. Funeral services for Robert will be held Saturday, June 20, 2020 at 1:00 p.m. at Bibb-Veach Funeral Home in Bowling Green with Brother Richard Biggs officiating. Visitation will be held on Saturday from 11:00 a.m. to the time of service. Robert was born in Mexico, Missouri, on September 10, 1943, to Robert Clark McKee and Merle Evangeline Fry McKee. He married his high school sweetheart, Doris Jeanne Rolle, at the First Christian Church in Vandalia, Missouri, on August 10, 1963. Robert has resided in Farber, Wentzville and Bowling Green, Missouri. After working for North American Refractories for a brief period of time, he relocated to Wentzville to begin his career as a lineman for Missouri Edison Co. He retired from Missouri Edison, now known as Ameren, after 37 years of service. Robert was a member of the Bowling Green Lions Club, the Jaycees, IBEW, AOPA, and also served as a Deacon at the Second Baptist Church. He obtained his private pilot license in March of 1989 and enjoyed flying his Piper Cherokee whenever he got the chance. Bob was a loving husband, father, grandfather, great-grandfather, friend, and man of God. His hobbies included fishing, hunting, farming, purchasing and raising cattle, and riding his Harley. In his younger years, he was instrumental in coaching his daughters’ softball teams and teaching the girls to ski. Robert is survived by his wife, Doris Jeanne; and his daughters: Melanie Alderson, Kelly McKee Smith (Mike), and Vicki Jennings (Raymond); grandchildren: John Alderson (Angela), Daniel Alderson (Katie), Matthew Alderson (Heather), Brooke Jennings Hagan (Zachary), Katelyn Jennings, and Alex Dorsey; great-grandchildren: Trenton Alderson, Landon Alderson, Harper Grace Alderson, and Austin Jo Alderson; and his sister, Jane Ann McGeorge (Ed). Robert was preceded in death by his mother and father. Pallbearers will be John Alderson, Daniel Alderson, Matthew Alderson, Alex Dorsey, Raymond Jennings, and Mike Smith. Honorary pallbearers will be Trenton Alderson, Bob McGeorge, Bill McGeorge, and Jerry Gamm. Memorials may be made to the American Cancer Society or the Alzheimer’s Association.

Robert Earl McKee, 76, of Bowling Green, was called home to be with Jesus on June 17, 2020. After a courageous battle with cancer, he passed away peacefully in his home surrounded by his family. Funeral services for Robert will be held Saturday,... View Obituary & Service Information

The family of Robert Earl McKee created this Life Tributes page to make it easy to share your memories.

Robert Earl McKee, 76, of Bowling Green, was called home to be...

Send flowers to the McKee family.