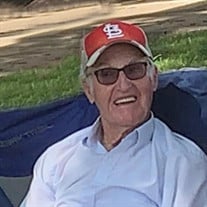 Robert Turpin, 88, of Bowling Green, MO passed from this world Wednesday April 13,2022 at Aspire Living. He was born October 14, 1933 on the Family Farm in Cyrene, MO, beloved son of Kinza B. and Mabel (Berry) Turpin. He will be sadly missed and lovingly remembered by his son Keith Turpin and his wife Laura of Lake of the Ozarks. Robert was a very proud Grampa to Megan (Dan) Leno, Tanner (Shelby) VanTress, Lindsay (Ryan) Phillips, and Lauren VanTress. Robert is also survived by two sisters Genevieve Parker, Louise Gfellner and a brother Jimmy Turpin. When reaching Heaven’s Gates he was met by his siblings that have gone before him, Doris Jean Turpin, Glen Turpin, Carl Turpin and R.B. Turpin. Robert’s only daughter, Vicki Turpin, passed March 30, 2021. He is also survived by several very special nieces and nephews. He was a graduate of Bowling Green High School Class of 1951. Robert proudly served his country in the United States Army during the Korean War. He was a member of the American Legion. Robert also was a member of the Louisiana Elks Lodge. Robert had been the Eastern County Commissioner and then elected to Presiding Commissioner of Pike County. All together he served the county a total of 13 years. Living and working on the family farm was a huge part of Robert’s life. Through those years on the farm, there were several fish fry’s, which Robert hosted. Later in life Robert enjoyed putting puzzles together and playing Dominoes. Due to the competitiveness of the Dominoes games, there were arguments of who was to sit by Robert. Robert had the patience of a Saint. He had to, he coached Keith’s little league baseball team from 7 years old thru high school. Robert was an avid St. Louis Cardinal fan, he was fortunate enough to attend a Cardinals vs. Cubs game at Wrigley Field in 2016, with Keith, Megan and Vicki. Robert was an avid golfer, he sometimes golfed daily with his brother, Jimmy. He was fortunate enough to get a hole in one! Faith was a huge part of Robert’s life. At Antioch Presbyterian Church, he served as Deacon and Elder, this church was very important throughout his life. Robert, Dad, or Grampa was dearly loved and will be missed by all who knew him. Memorials in Robert’s name may be made to Antioch Cemetery.

Robert Turpin, 88, of Bowling Green, MO passed from this world Wednesday April 13,2022 at Aspire Living. He was born October 14, 1933 on the Family Farm in Cyrene, MO, beloved son of Kinza B. and Mabel (Berry) Turpin. He will be sadly missed... View Obituary & Service Information

The family of Robert William Turpin created this Life Tributes page to make it easy to share your memories.

Robert Turpin, 88, of Bowling Green, MO passed from this world...

Send flowers to the Turpin family.