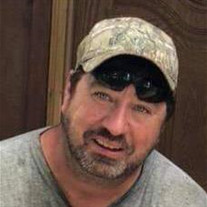 Rodney Jennings (Boober), age 49, of Frankford passed away July 25, 2019 at his home surrounded by his family and friends. Funeral services will be held 10:00 a.m. Tuesday July 30, 2019 at the Bibb-Veach Funeral Home in Bowling Green with Rev. Richard Epperson officiating. Burial will be in the Fairview Cemetery in Frankford. Visitation will be held Monday 4:00 – 7:00 p.m. at the Bibb-Veach Funeral Home in Bowling Green. Rodney was born February 26, 1970 in Columbia the son of Edward J. Jr. and Vivian L. Smith Jennings. On May 11, 2019 he married Stormy Dawn Phillips. She survives. Other survivors include sons Matthew Darin Jennings of Frankford, T.J. Hessel of Columbia; daughters Kelsey Lynn Jennings (Significant other Brian Rhee) of Palmyra, Ashley Renee Jennings (significant other Micah Duncan) of St. Clair, Breanna Nikol Bird of Mexico, Mariah Ann Hessel of Columbia and Alyssa Rose Hessel of Columbia; two grandchildren Dawson Paden of Mexico and Christian Hessel of Columbia; brothers Robert and Roger Jennings (Pat) both of Frankford; sisters Louise Simpson of Hannibal, Donna K. Finnigan (Tommy) of New London, Jeannie Gehringer of Frankford; and many nieces, nephews and cousins. He was preceded in death by his parents and niece Tosha Rae Finnigan. Rodney lived all of his life in the Frankford area, graduated Bowling Green High School in 1988. He graduated from Pike Lincoln Technical Center in Eolia with a welding degree and was part of the Salt River Christian Church. He worked at Wayne & B. Smith in maintenance and did many different jobs including welding and quarry work; he also worked at Pac-A-Way Company as a truck driver. Rodney enjoyed woodworking and created many beautiful pieces of furniture and he and Stormy worked together to build a beautiful home with a rustic interior of reclaimed barnwood, tin and wood. He enjoyed hunting, fishing, bowhunting, drinking with his buddies and telling stories, and being surrounded by nature. He enjoyed sitting on the porch with Stormy in the mornings and drinking coffee “porchin it”, playing checkers with his kids, watching a variety of movies including Westerns, Godzilla, Marvel, DC comics and even Disney and cartoons. Most of all he loved being around his family and friends. Everyone knew he was physically and mentally the strongest man around and was the most selfless man with the biggest heart. Pallbearers will be Doug Johns, Scott Buchanan, James Steffler, Brian Jennings, Harold Caldwell and David Houchins. Honorary pallbearers will be Nick Kelly and Lloyd Turner “Pee-Wee” Memorials may be made to Community Loving Care Hospice in Bowling Green and ALS in St. Louis.

Rodney Jennings (Boober), age 49, of Frankford passed away July 25, 2019 at his home surrounded by his family and friends. Funeral services will be held 10:00 a.m. Tuesday July 30, 2019 at the Bibb-Veach Funeral Home in Bowling Green with Rev.... View Obituary & Service Information

The family of Rodney "Boober" Jennings created this Life Tributes page to make it easy to share your memories.

Send flowers to the Jennings family.