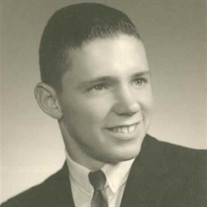 Roger Leon Mudd, age 67, of Silex, passed away May 17, 2017 at the Mercy Hospital in Creve Coeur. Funeral services will be held 10:00 a.m., Saturday May 20, 2017 at the Olney Methodist Church in Olney with Pastor Carolyn Hoffman officiating.... View Obituary & Service Information

The family of Roger Leon Mudd created this Life Tributes page to make it easy to share your memories.