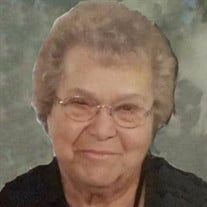 Roxie McMillen, age 89 of Frankford, passed away Saturday, September 23, 2017 at the Country View Nursing Facility in Bowling Green. Funeral services will be held at 10:00am on Wednesday, September 27, 2017 at the First Christian Church in Frankford with Rev. Gail Aurand and Rev. Bill Dexheimer officiating. Burial will be in the Fairview Cemetery in Frankford. Visitation will be held from 4:00pm until 8:00pm on Tuesday at the Bibb-Veach Funeral Home in Bowling Green. Roxie was born April 20, 1928 in Louisiana, the daughter of George Lee and Rosa Mae Patrick Ince. She married Lloyd C McMillen November 7, 1948. He preceded her in death February 13, 1993. Survivors include daughters Carol Lee (Gary) Hays of Perry and Sandy (John) Scherder of Frankford; grandchildren Shannon (Heather) Brewer of Frankford, Robby (Christina) Brewer of New London; Heather (Jarred) Jones of Frankford, Jamie (Jeff) Buckman of O’Fallon, Holly (Curtis) Delgman of Frankford and Travis (Tamara) Scherder of Frankford; great-grandchildren Lydia and Addison Brewer, Jonah, Luke, Parker, Andrew and Drake Jones, Payton, Aubrey and Owen Buckman, Wyatt and Bailey Delgman, Sawyer, Blake and Callie Mae Scherder; sister Norma (Dan) Roberts of Silex; in-laws Frankie Ince, Janie Wilson, Bonnie and Herman Schindler; many nieces and nephews. She was preceded in death by her parents, husband, brothers Patrick Ince and Floyd Ince, nephew Mike Roberts and niece Brenda Adams Hudson. Roxie grew up in Louisiana and graduated from Louisiana High School in 1946. Upon her marriage to Lloyd, she moved to Frankford where she lived the rest of her life. She was a member of the First Christian Church in Frankford since April of 1955 where she was a member of the Merry Aides Club. Roxie was also a member of the Haw Creek Club where she held the longest membership; she was a founding member of the Frankford Saddle Club and was a 4-H leader. Roxie enjoyed sewing and attending county music shows. Most of all, Roxie enjoyed spending time with her grandchildren and great grandchildren. Serving as pallbearers will be Roger Colbert, Tim Kurz, Elmo Shaw, Cliff Mahar, Harry Benn and Jim Hansen. Serving as honorary pallbearers will be Danny Roberts, Jerry Ince, Dale Cragen and Jesse Lucas. Memorials may be made to the Frist Christian Church in Frankford or to Pike County Home Health and Hospice.

Roxie McMillen, age 89 of Frankford, passed away Saturday, September 23, 2017 at the Country View Nursing Facility in Bowling Green. Funeral services will be held at 10:00am on Wednesday, September 27, 2017 at the First Christian Church in... View Obituary & Service Information

The family of Roxie McMillen created this Life Tributes page to make it easy to share your memories.

Send flowers to the McMillen family.