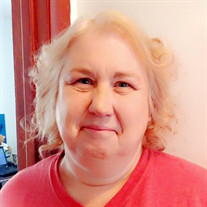 Ruth Ann Preston, 58, of Louisiana, passed away Monday, January 10, 2022 at South City Hospital in St. Louis, Missouri. Funeral services for Ruth Ann will be held Thursday, January 13, 2022 at 6:00 p.m. at Bibb-Veach Funeral Homes & Crematory in Bowling Green. Visitation will be from 4:00 p.m. to 6:00 p.m. on Thursday at the funeral home. Ruth Ann was born May 28, 1963 in Louisiana, Missouri to Raymond Wesley and Norma Jean Knapp Preston. She was united in marriage to Robert (Bob) Raddatz on May 15, 1987. To this union four children were born. Though Bob and Ruth Ann later divorced, they remained close friends. Ruth Ann grew up in Cyrene and attended and graduated Bowling Green High School in 1982. She lived in Louisiana all of her adult life. Ruth Ann primarily stayed at home and raised her family. She enjoyed reading, especially mystery novels. Ruth Ann loved to travel; with Tybee Island, Georgia being her favorite destination, as she loved the ocean. Spending time with her grandchildren was one of Ruth Ann’s favorite pastimes, as well as playing, laughing and joking with her girls. She loved music and dancing, and enjoyed rocking out to music in the car. Classic rock was her favorite genre, but she did have a soft spot for Brooks & Dunn. Ruth Ann also enjoyed watching western TV shows along with Criminal Minds. Ruth Ann is survived by her close friend and the father of her children, Robert (Bob) Raddatz of Louisiana; daughters: Kimberly Ann (Kenneth) Goddard of Springfield, Missouri, Racheal Marie (Paul) Motley of Louisiana, and Kristen Lynn (Ethan) Spangler of Bowling Green; grandchildren: Timothie, Nathan, Kierah, Paige, Alexis, and Rylie; brother, Raymond Preston; sisters, Linda (Ed) Kerns and Debbie (Butch) Knapp; along with a large extended family. Ruth Ann was preceded in death by her parents; a stillborn son, Nathan Eugene Raddatz; and her mother-in-law, Norma Jean Raddatz. Memorials may be made to the Donor’s Choice.

The family of Ruth Ann Preston created this Life Tributes page to make it easy to share your memories.

Send flowers to the Preston family.