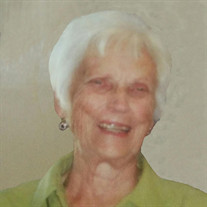 Eula Mae “Sally” Reed Halley Smith, age 90, of Bolivar formerly of Silex and Louisville departed this earth on June 15, 2016 in Bolivar. Funeral services will be held 10:00 a.m., on Saturday, June 18, 2016 at the Indian Creek Baptist Church with Rev. Don Amelung and Rev. Joe Miller officiating. Burial will be in the Indian Creek Memorial Gardens Cemetery. Visitation will be held from 4:00 – 7:00 p.m., Friday, June 17, 2016 at the Bibb-Veach Funeral Home in Bowling Green. She was born January 26, 1926 in Fremont, the daughter of George Walter and Ora Effie (Brawley) Reed. Sally was married to Charles Leon Halley in 1948 and the couple was blessed with two children – Judy and Penny. A few years after Leon’s death in 1997, Sally married Stanley Smith. Sally was one of 9 children and had fond memories of growing up in a large family. She moved to St. Louis to work in a war plant after four of her brothers, including her twin brother, Bill, were drafted into World War II. She worked at Wagner Electric and then transferred to Emerson Electric, where she met Leon. After they were married they moved back to Silex, where Leon grew up. They share cropped in several different farming communities, until 1966 when they purchased a farm near Louisville. They farmed this ground together until 1995, when health issues caused Leon to stop farming. Sally was preceded in death by her husbands, parents, five brothers, Howard, Clifford, Alvis “Chick”, Bill, and Boyd “Doc” and one sister, Lena Woodard. Survivors include two daughters Judy Davis and husband David of Bolivar and Penny Schramm and husband Larry of Wentzville, one brother Elvin Reed of Cedar Hill, one sister Thelma Lewis of Orville, CA; six grandchildren, Melanie Davis MacLaughlin, Melissa Davis, Erin Davis Francka, Kevin Schramm, Kristen Schramm and Kellie Schramm; four great grandchildren, Anna, Jacey, MacKenzi and Knox and many nieces and nephews. Pallbearers will be Chad MacLaughlin, Matt Francka, Kevin Schramm, J.R. McDonald, Ken McDonald and John Hopkins. Memorials may be made to the Indian Creek Memorial Gardens Cemetery Fund.

The family of Sally Halley Smith created this Life Tributes page to make it easy to share your memories.