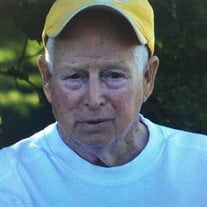 Samuel Thomas (Tommy) Sisson, 88, of Churchville, Virginia, formerly of Bowling Green, Missouri passed away Friday morning, March 15, 2019, at Birch Gardens Assisted Living. A Mass of Christian Burial will be held at 10:00am on Thursday, March 21, 2019 at the St. Clement Catholic Church with Rev. Jason T. Doke, S.T.L. officiating. Interment will be at the St. Clement Cemetery. Visitation will be held on Wednesday, March 20, 2019 from 6:00pm until 8:00pm at the Bibb-Veach Funeral Home in Bowling Green. Born August 3, 1930 in Curryville, Missouri, Tommy was the son of Samuel (Sam) Sisson and Naomi (Scranton) Sisson. On August 18, 1956 in St. Clement, Missouri, he was united in marriage to Eunice Mary (Geujen) who proceeded him in death in 2002. Tommy is survived by his daughter and son-in-law, Rhonda and Bill Digman of Churchville, Virginia, two granddaughters, Shelby and Sydney Digman of Churchville, Virginia and a half-sister Debbie Dameron of Bowling Green. His parents, his brother, Glen and half-brother David and half-sister Josephine preceded Tommy in death. Tommy lived most of his adult life in Bowling Green, Missouri. He was a member of the United States Marine Corp and served in the Korean War. After his service he returned to Missouri and was employed at Valley Steel in Louisiana, Missouri. He then joined the Missouri Highway and Transportation Department in Bowling Green and retired in 1990 after 29 years of service. Upon the death of his wife in 2002, Tommy moved to Kirksville, Missouri and lived with his daughter and family. He very much enjoyed collecting coins and old International Farmall Cub tractors. In 2007 Tommy moved with the family to Virginia where he often said he enjoyed the more seasonable weather and sunshine of the Shenandoah Valley. Tommy was able to live with his family and watch his granddaughters grow up which was a joy to him. Serving as pallbearers will be Steve Illy, Joey Akers, Ronnie Akers, Roy Sisson, Bill Digman and Bob Digman. Memorial can be made to the Glaucoma Foundation or St Clement Cemetery.

The family of Samuel Thomas Sisson created this Life Tributes page to make it easy to share your memories.

Send flowers to the Sisson family.