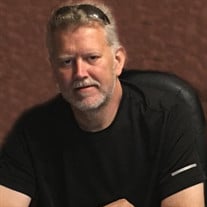 Scott Eugene Orf, 51, of Bowling Green, Missouri, passed away peacefully at his home on Monday afternoon, April 26, surrounded by his family and the rolling farmland he loved. A 1988 graduate of Bowling Green High School, Scott lived most of his life on the family farm off Highway Y southwest of town. Visitation will be on Friday, April 30, 2021, at Bibb-Veach Funeral Home and Crematory in Bowling Green from 4-8 pm. A morning mass will be held on Saturday, May 1 at 10 am, at St. Clement Catholic Church with Father Henry Ussher officiating. Those who knew Scott best understood his love of three things – family, hunting, and learning. The youngest of 13 children of James A. and Vera I. (Nelson) Orf, Scott grew up with siblings, nephews, nieces, aunts, uncles, and cousins. Whether it was building a raft on a family farm pond or making the “Nelson secret recipe” apple butter in an antique copper kettle over an open fire, Scott loved being around his family. To the nieces and nephews, Scott was the “perfect uncle” who would play Yatzhee until midnight, watch a movie, or pass along knowledge of family history with equal wit and humility. To the brothers and sisters, Scott was the “baby brother” and constant companion of sisters Valerie and Patricia. After graduating, Scott worked at local saw mills and helped on the family farm. He later worked for Clean Pro Restoration at Lake of the Ozarks, but always maintained a close relationship with the place he grew up, coming home most weekends. In 2018, Scott was diagnosed with pancreatic cancer at University Hospital in Columbia, Missouri. Time, and specialists from Missouri to New York City, would come to show Scott’s cancer was a rare neuroendocrine tumor (PNET). Family members and Scott, himself, drove to treatments almost two hours from home, oftentimes for nothing more than bloodwork, as part of a clinical trial that Scott hoped would someday help others. As Scott fought his battle with pancreatic cancer, he learned that one of his heroes, Alex Trebeck, was in a similar fight. Few were those who could match Scott’s knowledge as he sat and watched Jeopardy, not only knowing most of the answers, but also the background behind them. Scott loved deer hunting. Whether the means was rifle, primitive weapon or bow, the fall held a special place in Scott’s life as he pursued the perfect buck. Even as the disease weakened him, Scott refused to accept rides to his stand, knowing the engine might frighten the deer, and, instead, walked the half mile with his bow. Scott is survived by siblings: Paula (David) Hester of Ottumwa, Iowa, Duane Orf of New Hartford, Pam O’Donnell of Phoenix, Arizona, Aaron Orf of Columbia, Missouri, Jeff Orf of Bowling Green, Barb Shinn of Bowling Green, Dwight (Tammy) Orf of New Hartford, Shari Tullock of Troy, Missouri, and Valerie (Joe) Edwards of Chattanooga, Tennessee; nieces and nephews: Tyson Geissert, Heather Francis, Alesha Packer, Ashley Holtsman, Alaina O’Donnell, Renee O’Donnell, Drew Orf, Kelly Borchert, Matt Orf, Jafra Pearson, Brittany Orf, Cass Shinn, Travis Shinn, Cole Shinn, Jason Orf, Shane Orf, Ashlee Ellis, Latesha Tullock, Dustin Tullock, Kayla Moore and Morgan Raufer; along with many aunt, uncles and cousins. He was preceded in death by his parents and siblings: Sandy Orf, Ronnie Orf and Patricia Orf. Pallbearers are Dwight Orf, Cole Shinn, Ashley Holtsman, Tyson Geissert, Dustin Tullock, and Shane Orf. Honorary pallbearers are brothers Aaron Orf, Jeff Orf, Duane Orf, and nephew Cass Shinn. Memorials may be made to Mobility Worldwide, Columbia, Missouri or Dawn Hill Flight Foundation and Bowling Green Cancer Memorial Park. Online condolences may be left at www.bibbveach.com.

Scott Eugene Orf, 51, of Bowling Green, Missouri, passed away peacefully at his home on Monday afternoon, April 26, surrounded by his family and the rolling farmland he loved. A 1988 graduate of Bowling Green High School, Scott lived most of... View Obituary & Service Information

The family of Scott Eugene Orf created this Life Tributes page to make it easy to share your memories.