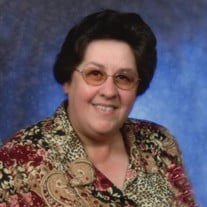 Sherry Lee Mendonsa, age 66 of Eolia, passed away peacefully December 29, 2020 with her family by her side at Blessing Hospital in Quincy, IL. According to her wishes, private services were held and cremation rites were conducted by Bibb-Veach Funeral Home in Bowling Green. Sherry was born July 25, 1954 in Troy, MO, the daughter of Forrest Eugene, Jr. and Helena Augusta Vaughn Robinson. As a child, Sherry grew up living all around Missouri and Kansas, as her parents pastored churches. When living back in Foley, MO, she met Buzz Mendonsa. They married June 2, 2007. They moved back to the Mendonsa family farm and built the house they currently share. Survivors include her husband Buzz Mendonsa of Eolia, MO; daughter Nickie Nelson (Richard) of Hannibal; son Jordan House of Silex; grandchildren Ian and Kelby Nelson; siblings Don “Bob” Robinson (Mary) of Osage Beach, MO, Norma Hamilton of Fisher, IN; 14 nieces and nephews Anna Keck (Charlie Fraker), John Wayne Hamilton, Robert Hamilton, Brad Robinson (Stephanie), Shane Robinson, Rainer Robinson (Claudia), Yvonne Weidenback (Heinz), Tammy Thomas (Paul), Justin Robinson (Donna), Lisa Croswell (Brian Ardulio), Sarah Robinson, Dwayne Robinson and Dusty Robinson; 32 great nieces and nephews; 38 great-great nieces and nephews. She was preceded in death by her parents; brother Forrest Eugene “Gene” Robinson Jr; nephew Forrest Eugene “Little Forrest” Robinson III. Sherry began her working years at Hwy 79 Meats in Winfield and Browns Processing, before moving away and working for Greeves Grocery Store in Kansas. When she returned to the area, she worked for Norths Grocery Store in Elsberry and American Botanicals in Eolia, before working and retiring from CBC Bank in Clarksville in 2019 as branch manager. In her spare time, Sherry enjoyed scrapbooking and making homemade cards. She enjoyed tending to her yard and planting flowers. She recently panted over 90 tulips and was looking forward to seeing them grow this spring, while sitting outside looking at her hummingbirds. She enjoyed listening to Southern Gospel Music and being surrounded by her church family as well as her own family and friends. Known for many things, she was known mostly for being Buzz’s sweetheart, although she could often be heard calling Nickie and saying, “Do you know what your father did?” She was loved by all and will be greatly missed. Memorials may be made to Eolia Free Holiness Church. Online condolences may be left at www.bibbveach.com

Sherry Lee Mendonsa, age 66 of Eolia, passed away peacefully December 29, 2020 with her family by her side at Blessing Hospital in Quincy, IL. According to her wishes, private services were held and cremation rites were conducted by Bibb-Veach... View Obituary & Service Information

The family of Sherry Lee Mendonsa created this Life Tributes page to make it easy to share your memories.

Send flowers to the Mendonsa family.