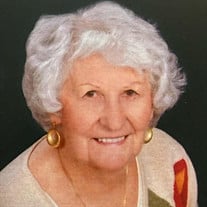 Shirley LaJoan Wayman Briscoe Boyles, age 84 of Kirksville, formerly of Hannibal, passed away Easter morning, Sunday, April 4, 2021 surrounded by her family. Shirley was born June 3, 1936 at the family home in Elsberry, MO. She was the daughter of George Franklin and Martha Ellen Birkhead Wayman, and the eldest and only daughter of their three children. Shirley married Jackie Briscoe in 1953, and was a graduate of Elsberry High School. To this union two children were born, who she loved dearly. She later married Jack Boyles August 21, 1982 and spent 38 wonderful years with him until he passed away September 20, 2020. Shirley spent her working years as a secretary for the Missouri Department of Conservation and later served as a secretary in Hannibal at the Farmers Insurance office. Her love for the Lord was rooted in her Baptist faith early on in the rural Star Hope Baptist Church community in Elsberry and later in the Methodist Church in Hannibal & Kirksville where she was a member of a Methodist Church ladies’ group. Shirley was never one to let her hands stay idle long. Sewing and stitching was her favorite pastime, whether it was needlepoint, cross stitch, or crewel, she was always creating a new masterpiece. After moving to Kirksville she found a new hobby that brought her great joy, collecting tea cups and attending tea parties. She enjoyed cooking for family dinners, doing a puzzle and reading a good novel. Shirley loved the sun on her skin, especially if there was water nearby. She enjoyed canoeing down the Jack Fork & Current Rivers with her family when her kids were still at home, and spent time at the Lake of the Ozarks with JoEllen & Clayton during the summer. After retirement she and Jack spent their winters in Sanibel Island, FL, and most days she could be found sitting on the beach with a good book or walking the beaches in the traditional “Sanibel Stoop” as she looked for shells she loved to collect. If Shirley couldn't get to the water to soak up some sun, she would sit in her next favorite place out on her deck at home. She would enjoy the sunshine, while enjoying a cup of coffee and watching the hummingbirds, Baltimore orioles, and other birds she fed. As much as she loved the warmth of the sun, Shirley loved the warmth of the holidays that Christmas brought. Shirley had a collection of Santa Claus figurines from all over the world that brought her great joy every year when Christmas came around, and Shirley shared her joy of Christmas with her children as she passed down her love of decorating for the holidays to them. Shirley was also an avid sports fan. While she could be found watching many different sports, it was the St. Louis Cardinals and the Mizzou Tigers that kept her attention the most. Shirley never missed a Cardinals game and could always be found at the TV catching every play. Above all Shirley treasured her love of family and their times together; sharing good food, rousing games of Rook or dominoes and baking Christmas cookies enriched not only her life but blessed each family member. She was preceded in death by her parents Frank & Martha Ellen, husband Jack, and nephew Steaven Wayman, In-Laws Jack & Josephine Briscoe, Johnny & Helen Boyles. Survivors include her son Bill Briscoe (Kay) of Elsberry; daughter JoEllen Storch (Clayton) of Bowling Green; grandchildren Willie Briscoe (Catt) of Elsberry, and Victoria Briscoe (fiancée Frank LeBeau) of Bowling Green; brothers Joe Wayman (Julie) of Elsberry, and Dustin Wayman (Anna) of Belleville, IL, Sister-In-Law, Mary of Maryland; aunts, uncles, nephews, nieces, cousins, and many friends. Shirley will be greatly missed by all who knew and loved her. Her wishes were to be cremated. A memorial service will be planned at a later date. Family request donations be made to: Pike County Home Health and Hospice in Bowling Green, MO, who provided loving support the last six months so that Shirley could remain in JoEllen's home surrounded by her family and friends. Donations can be mailed to the Bibb Veach Funeral Home or directly to Pike County Home Health & Hospice, 1 Healthcare Place, Bowling Green, MO 63334.

Shirley LaJoan Wayman Briscoe Boyles, age 84 of Kirksville, formerly of Hannibal, passed away Easter morning, Sunday, April 4, 2021 surrounded by her family. Shirley was born June 3, 1936 at the family home in Elsberry, MO. She was the daughter... View Obituary & Service Information

The family of Shirley LaJoan Boyles created this Life Tributes page to make it easy to share your memories.

Send flowers to the Boyles family.