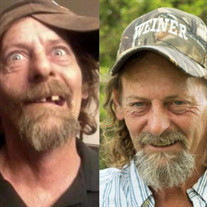 Terry Lynn Burnett, AKA “Weiner” passed away peacefully at his home on May 12, 2022 with his annoying daughters by his side. Weiner left his “stamp” on everyone that was lucky enough to have met him and was known for his one of a kind dance moves and laugh which was sometimes too loud and annoying. He spent a lot of his time buying things that we would call junk but he would argue it was a “good deal”. He absolutely loved spending time with his children and grandchildren even though he complained about us constantly and spoiled the grandkids too much with sugars and useless toys. He was extremely proud of his son, who was overseas in the Air Force serving our country at the time the old fart decided to peace out. The best day in the world was when he was born on July 12th, 1958 in Arkansas and he had been reeking havoc on earth ever since. If you made the mistake of asking him why his nickname was “Weiner” he would tell you “well, it’s not cuz’ im skinny!” Weiner left a bunch of crap to go through to his “cradle robbing” girlfriend Debbie Grgurich, daughters Lesli Fox (Wade Hinds) and Tracy (Steve) Brookshier, and son Chris Burnett. His spoiled rotten grandchildren include Cade, Monroe “Money” and Keatyn Fox, Stevie Jane and Trace Brookshier, and Cooper Bounds. He left behind his mother Shirley Williams who he had received much love and bull-headedness from. He is now partying it up in heaven with his father Leslie “Junior” Burnett, sister Vicki Straube, brother Rick Burnett and other good friends and family that beat him to the pearly gates. Terry never knew a stranger, was always the last one to leave a party, he loved his bonfires and busch heavy. He was a jack-of-all trade’s kind of guy who was always willing to help others before himself; this can be proven by all the unfinished projects he had of his own. He was a hard worker, working most of his life doing construction for ESS and Magruder. He loved tinkering in his shop with his cold beer and jamming out to all the good ol’ 70’s hair bands. Weiner will be incredibly missed by all that new him and in true Weiner fashion he wanted to have a big ass party as his final hoorah. All are invited to join in on the Weiner Bash on Saturday, May 21st 2022 at his home starting at 2pm and won’t end until the sun comes up. Rain or shine. The family is setting up a Weiner’s Tradesmen Scholarship to assist trade students from Pike Lincoln Tech Center with their post-graduation needs. Donations can be sent to Community State Bank in care of the Weiner Tradesmen Scholarship or to Pike County Hospice for their amazing compassionate service to Terry and the family.

The family of Terry Lynn "Weiner" Burnett created this Life Tributes page to make it easy to share your memories.

Terry Lynn Burnett, AKA “Weiner” passed away peacefully at his...

Send flowers to the Burnett family.