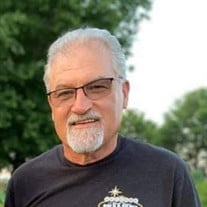 Timothy Major Brown, 60, of Frankford, Missouri passed away Thursday, December 17, 2020 at his home. Timothy was laid to rest at Fairview Cemetery, Louisiana, Missouri, on December 21, 2020. Tim was born May 1, 1960 to Roy Major and Dorothy Myrtle Huckstep Brown in Pike County Missouri. He was married to Cynthia Marie Hansen, having two children. He later married Jacqueline Grace Tinker, having four children. On September 2, 2016 he married Catherine Lynn Adams, with whom he spent his last seven years. Tim is survived by his wife, Catherine, and his six children: Miranda Lenee’ Brown of Bowling Green, James Roy Major (Lacey) Brown of Pleasant Hill, Missouri, Jacob Andrew (Rachelle) Brown of Pacific, Missouri, Rebecca Joann Brown (James Simpson) of Wright City, Missouri, Abigail Mae Brown of Washington, Missouri, and Josiah Aaron (Abigail) Brown of Warrenton, Missouri; step-children Derek Phillip (Stephanie) Rosen of Frankford, Missouri and Candace (Nick) Bergesch of St. Louis, Missouri; grandchildren: Ava, Kaylee, Miles, Skylar, Jackson, Jules, Rylan, Kyler, and Melody; sister Kathleen Cottrell of Bowling Green, Missouri; niece Krystal (Steve) Sevier; and nephew Korey Cottrell. Tim was preceded in death by his parents. Tim grew up on the family farm in Cyrene, Missouri. Growing up, he was a local 4H club member. He graduated class of 1978 from Bowling Green High School, where he was very involved in choir and FFA, played football and was a member of band and jazz band. After graduation, Tim continued playing music around Pike County and the St. Louis area. He also farmed, and worked for 4M Bridge. After leaving Cyrene, he attended Union Carpenter School and spent more than 20 years in commercial construction and carpentry, rising to superintendent. He has lived in Washington, Marthasville, and Foristell, Missouri and returned back to Pike County in 2015. Tim had three main passions. He loved his family, playing music, and being outdoors. Most often, his passions intertwined. He loved to feature his family with his music. Whether he was playing at a venue, in church, or at a local community event, he loved having his family with him on stage. Being outdoors, working or playing, brought Tim happiness. Tim loved his family, and adored his grandchildren. If he didn’t teach his children how to do something, he taught them the drive to learn it themselves. His Christian faith, hard work ethic, and love for people will be remembered and carried on by his family and friends. Tim will be greatly missed by all who knew him. Pallbearers were James Brown, Jacob Brown, Josiah Brown, James Simpson, Korey Cottrell, and Derek Rosen. Memorials may be made to Grassy Creek Baptist Church and Fairview Cemetery of Louisiana, Missouri. Online condolences may be made at www.bibbveach.com.

Timothy Major Brown, 60, of Frankford, Missouri passed away Thursday, December 17, 2020 at his home. Timothy was laid to rest at Fairview Cemetery, Louisiana, Missouri, on December 21, 2020. Tim was born May 1, 1960 to Roy Major and Dorothy... View Obituary & Service Information

The family of Timothy Major Brown created this Life Tributes page to make it easy to share your memories.