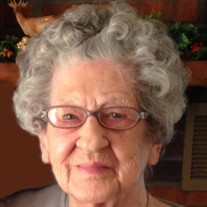 Viola Gladys “Toni” Roberts, 103, of Silex, Missouri, passed away Monday, March 16, 2020 at Mercy Hospital in Troy, Missouri. Private services for Toni are being handled by Bibb-Veach Funeral Home. Burial will be in Greenwood Cemetery in Clarksville, Missouri with Fr. Charles Tichacek officiating. Toni was born July 8, 1916 in Ashley, Illinois, to John W. and Mary Fuchs Koenigsmark. Toni married James W. Davidson on November 16, 1940 in St. Louis. He preceded her in death in 1971. She married Joe Roberts in April 1973. He also preceded her in death on December 8, 2011. Toni attended Ashley, Illinois High School where she graduated in 3 years at the age of 16 in 1932. Her last year in high school she served as class President, editor of the school newspaper and yearbook. She was a straight A student, and valedictorian of her class. She was also a member of the Glee Club, and Chorus for 3 years. She played basketball, softball, and was a member of the Girl’s Athletic Association. After High school Toni worked in Mt. Vernon, Illinois, where she met James, who owned his own trucking company. After they were married, they lived in St. Louis for 3 years, moving to Kansas City, Missouri in 1943. In the spring of 1949, they purchased a new farm in Independence, Missouri. They then relocated to Clarksville, Missouri in March of 1953 where James started farming. James died on May 4, 1971. In the spring of 1972, Toni was introduced to Joe Roberts. The couple married and she moved to Silex, Missouri in April 1973, upon which Toni inherited 3 wonderful step-daughters. Toni is survived by her son, John Davidson, also of Silex; step-daughters Terry Southerland of St. Charles, Jacqueline Roberts, and Donna Dameron (Robert “Bobby”) all of Silex; 7 grandchildren; 5 great-grandchildren; 1 great-great grandson; a niece, Linda Wallace of St. Louis; and many cousins. She was preceded in death by her parents; husbands; one brother; 3 sisters; and a grandchild, Robert (Robbie) Dameron. Pallbearers will be Dennis Mudd, Tim Mudd, Terry Mudd, Gary Mudd, Fred Klein, and Tom Klein.

The family of Viola "Toni" Gladys Roberts created this Life Tributes page to make it easy to share your memories.