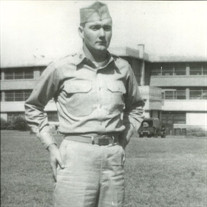 Walter Allen Angel, 89, of Bowling Green passed away Wednesday, April 20, 2022 at his home. Graveside services for Walter will be held Monday, April 25, 2022 at 10:00 a.m. at Indian Creek Memorial Gardens Cemetery in New Hartford, Missouri with Pastor Judah Marx officiating. Walter was born June 10, 1932 in Bowling Green, Missouri to Clarence and Mildred Angel. He was united in marriage to Betty Jane Taylor on June 16, 1962 at Bro. Rittenhouse’s residence. She survives. Also surviving are daughters Sherie Wommack (Joseph) of Silex and Kim Hudson (Mike) of Foristell; grandchildren: Kala Buck (Kevin), Nathan Wommack (Clare Eggering), Jessica LaRue (Jesse), and Eric Hudson; great-grandchildren: Margot LaRue, Sophie LaRue, and Michael LaRue; and many nieces and nephews. Walter was preceded in death by his parents; brothers Cecil Angel and Glenn Angel, along with an infant brother. Walter spent most of his life around Indian Creek and Louisville area, always on the family farm. He served in the United States Army during the Korean War, spending time in Korea. Walter spent his time doing what he enjoyed the most; farming, specifically raising cattle. He spent his years farming alongside his brother, Cecil and nephew, Jimmy Dale Angel. He loved spending time with his children, and later attending his grandchildren’s ball games. He always had time to play games with his children and grandchildren, and liked to play pitch with friends and family. Walter managed slow-pitch softball teams, and played himself into his 50s. He also enjoyed coon hunting. Walter taught all of his children and grandchildren how to drive. He loved going to McDonald’s several times a week to drink coffee and have breakfast to visit with a group of friends. Memorials may be made to Indian Creek Memorial Gardens Cemetery.

The family of Walter Allen Angel created this Life Tributes page to make it easy to share your memories.

Send flowers to the Angel family.