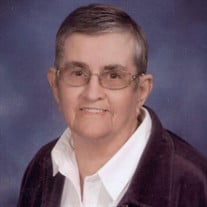 Wanda Jane Holcumbrink, age 83 of Curryville, passed away at 6:26 p.m., Monday, November 28, 2016 at the Pin Oak Nursing Center in Mexico. A Celebration of Life Funeral Service will be held at 11:00 am on Friday, December 2, 2016 at the New Harmony Christian Church in Curryville with Marion Branstetter, nephew of Wanda, officiating. Visitation will be held from 4:00 p.m. until 7:00 p.m. on Thursday at the Bibb-Veach Funeral Home in Bowling Green and Friday 10:00 a.m. – 11:00 a.m. at the church. Serving as pallbearers will be Jessica Holcumbrink, Megan Morgan, Cody James, Dustin Holcumbrink, Chase Holcumbrink, Michael Luebrecht, Ryan Luebrecht, and Jenna Leubrecht Norviel who will carry her to her final resting place at New Harmony Cemetery in Curryville. Honorary pallbearers will be Kitson Holcumbrink, Talie Morgan, Brenna Holcumbrink, Kennedy Holcumbrink, Bailey Holcumbrink, and Charley Holcumbrink. Wanda was born on October 15, 1933 in Middletown the daughter of Calvin and Alma Lea Moore. She graduated from Bowling Green High School. Wanda Married Barney Holcumbrink on November 5, 1953. She farmed alongside her husband, Barney, for 50 years. He preceded her in death on June 5, 2004. Wanda and Barney made their home north of Curryville. The couple had three children: sons Leon (Kay) Holcumbrink of Springfield, Jesse (Mary Ellen) of Mexico, and daughter Linda Holcumbrink (James) of Vandalia. Wanda devoted her life to her family. She was a member of the New Harmony Christian Church where she served as deacon, Sunday school teacher and preached over services on several occasions. She loved blue grass and gospel music, gardening, fishing, card games, camping, mushroom hunting, her girlfriends, and family gatherings. Wanda served the Lord and was known to take up the role of caregiver for family and friends in need. She read her Bible every day and was a member of her church’s Christian Women’s Fellowship group. Wanda had five grandchildren and three more she ‘adopted’ as her own: Jessica Holcumbrink, Megan Morgan, Cody James, Dustin Holcumbrink, Chase Holcumbrink, and Michael, Ryan and Jenna Luebrecht; and six great- grandchildren Kitson Holcumbrink, Talie Morgan, Brenna Holcumbrink, Kennedy Holcumbrink, Bailey Holcumbrink and Charley Holcumbrink. She is survived by two sisters; Sue Moore Davis, Kay Moore Willis; one brother R.E. Moore and many nieces and nephews. Wanda was preceded in death by her husband, parents, twin brothers; Merle and Verle Moore; sister Yvonne Moore Brandstetter and brother Erwin Moore. Wanda was a woman of strong faith who will forever be missed by family, friends, and neighbors who loved and respected her. Memorials may be made to the New Harmony Christian Church or the New Harmony Cemetery.

The family of Wanda Jane Holcumbrink created this Life Tributes page to make it easy to share your memories.

Wanda Jane Holcumbrink, age 83 of Curryville, passed away at...

Send flowers to the Holcumbrink family.